During the day on Friday, the USD/CAD pair rallied quite significantly after the jobs numbers came out of both the United States and of course Canada. This was a bit of a “perfect storm” when it comes to this particular market, because we ended up having a strong number out of the United States, in fact one that actually broke above the estimates. At the same time though, we have the Canadians losing jobs last month, and that of course means that the US dollar should rally against the Canadian dollar, and that’s exactly what we have seen.

On top of that, we have the uptrend line that we have been following, and it coincided with the 1.30 level as well, an area that of course has been very important on longer-term charts as well. Adding more fuel to the fire is the oil markets falling overall, and that of course works against the value the Canadian dollar also. After all, the Canadian economy is highly driven by petroleum, and not only do we have falling prices, but we have shrinking demand in various parts around the world. I believe that the Canadian central bank is nowhere near raising interest rates, and therefore it’s likely that the US dollar should continue to strengthen against it. I also believe that we are in a longer-term uptrend, and that at least in the short-term we should see buyers entering this market on pullbacks, as we reach towards the 1.35 level over the next several weeks.

I believe that the 1.30 level should now end up being the “floor” in the market, and with that being the case I feel that this is essentially going to be a “buy only” type of situation. This in fact is one of my more favorite longer-term setups, and I believe that it is given enough time going to be a bit of a “career maker” for quite a few traders out there. We are entering a new phase of strong US dollar trading, and the Canadian dollar of course will be punished as a result. 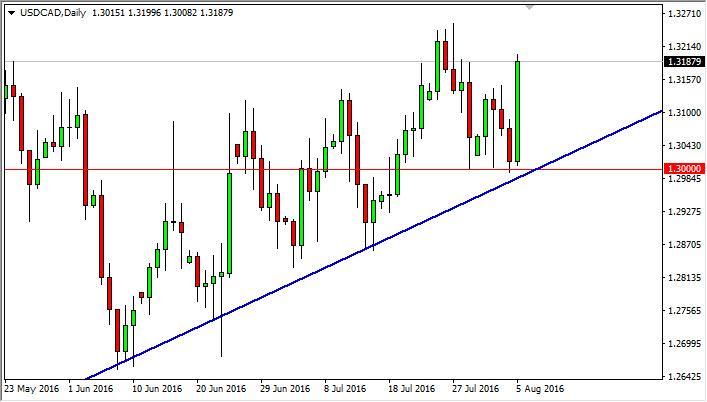