The USD/JPY pair found enough support at the 101 level to bounce and form a hammer for the session on Tuesday. That being the case, it is almost impossible for me not to notice the fact that we found support at the very top of the range that we had pointed out previously. We have been saying that the market should find plenty of support between the 100 and the 101 levels in order to turn the momentum back around. It appears that the market has in fact done that, and with nonfarm payroll numbers coming out on Friday, we believe that the move higher will more than likely continue given the right numbers.

The US dollar will be greatly influenced by what’s going on with the Federal Reserve, which of course will be greatly influenced by what’s going on in the employment situation. The United States had a horrible jobs number during the month of December, and with this Friday coming up, you can bet that the market will be focusing on that number rather drastically. We believe that this market will have more sensitivity to that announcement than most other ones, so therefore we could be seen people trying to back out of short positions as they know sooner or later the market could shoot straight back up.

Going forward, we believe that this market will eventually trying to go to the 105 level given enough time, although it will more than likely be a bit choppy on the way out. Nonetheless, we are not willing to sell this market, and believe that the 100 level is the “floor” in this market going forward. With that, we believe that breaking of the top of the candle for the session on Tuesday is the signal that we are looking for in order to go long. A pullback at this point time should find plenty of support below, going all the way down to the 100 handle, and quite frankly probably below there as well. With that being said, we are “buy only” in this market and will buy on a break of the top the hammer, or simply sit on the sidelines and wait for another buying opportunity. 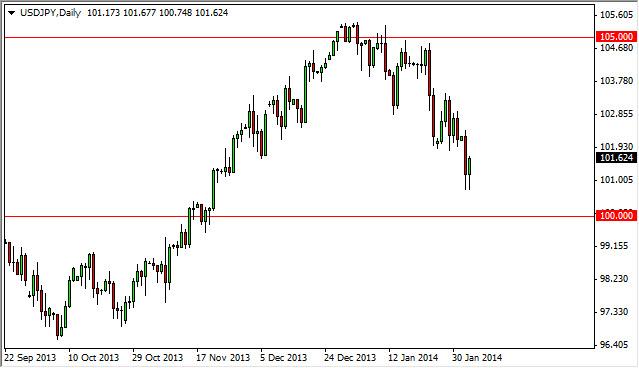