The EUR/USD pair initially fell during the course of the day on Wednesday, but we found enough support just above the 1.08 level to turn things back around and form a hammer. The hammer of course is a very bullish sign, and having said that if we can break above the top of that hammer we feel that the market should continue to go higher, perhaps reaching towards the 1.10 level above. That is an area that has been important recently, so it’s not surprising that we would target that level. Because of this, we think that this pair could be one that attracts a lot of order flow here and the next couple of sessions.

On the other hand though, we break down below the 1.08 level, that would be catastrophic for the Euro as it would show a real capitulation of support. This is a pair that tends to be choppy and attract a lot of short-term traders, but having said that it’s likely that the pair will be difficult for most people.

At this point time, we believe that the 1.1050 level is the “ceiling” of the overall trading range that we have been in for some time, and it is likely that we will struggle was we get to that area. However, with get above there it’s likely that the market continues to go even higher, perhaps reaching towards the 1.13 level. If the keep in mind though that the central banks involved in this currency pair are both looking to be very soft and weak as far as monetary policy is concerned, so a lot of headline risk is still out there when it comes to trading this pair.

With the jobs number coming out of America on Friday, it’s likely that the pair will make short and sudden moves, with more volatility coming during the session on Friday. In fact, that jobs number could really get this pair moving for an intermediate-term type of situation in a pair that tends to be very erratic at times. 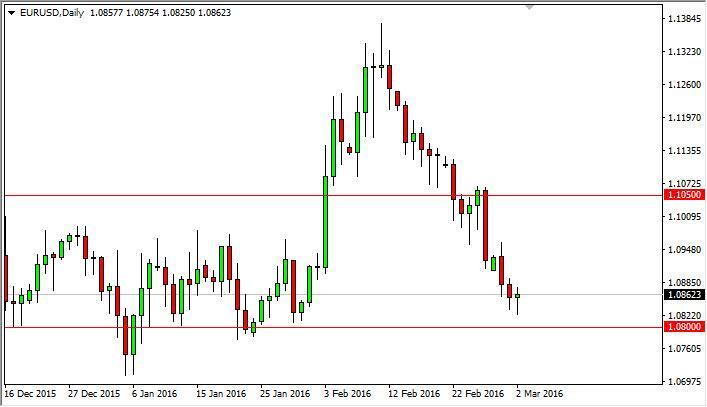