The GBP/USD pair initially tried to rally during the course of the day on Wednesday, but found the 1.52 level be far too resistive. By doing so, the market turned back around to form a bit of a shooting star, and then break down to a fresh, new low. With that being the case, looks like the market is ready to go lower, and it should be stated that the one thing that may slow the descent down is the fact that we have Nonfarm Payroll coming out tomorrow. After all, a certain amount of fear will be found in this marketplace as well as other Forex pairs as that announcement coming out on Friday is so important to the value of the greenback in general.

Looking at the chart, if we can break down below the bottom of the candle for the session on Wednesday, we feel this market will try to work its way back down to the 1.50 handle. On the other hand, if we do rally from here and we have more than enough selling pressure above to keep us from going long. We would simply wait for that rally to run out of steam and start shorting at higher levels. We have no interest whatsoever in buying this market right now, as we see a massive amount of resistance above, and all the way to at least the 1.55 level, if not higher.

We have recently broke down below the bottom of a significant uptrend line, and that of course is a very negative sign in general. We have not only broke down below that uptrend line though, we have come back to test that level again, and then fell from there. There are multiple reasons the think that the resistance above should hold, at least for the intermediate time. With this, we are simply looking for selling opportunities on breakdowns and short-term rallies that failed to hang onto the gains. The jobs number will more than likely highly influenced this pair as well, so keep in mind that a lot of volatility is to be expected tomorrow. 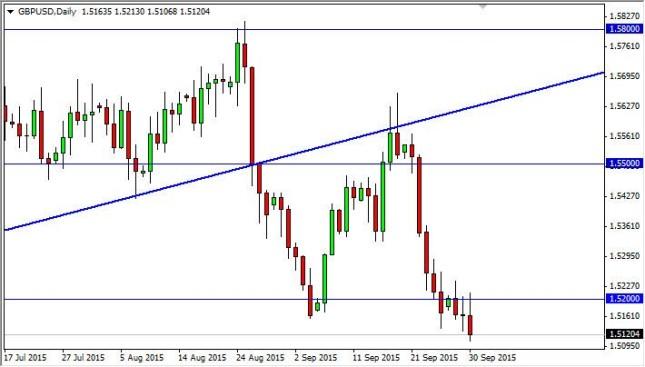