The GBP/USD pair initially rallied during the course of the day on Tuesday, but found the 1.48 level above was resistive enough to turn things back around completely. Because of this, we formed a very negative candle and it looks as if we have finally exhausted the rally that has occurred in this market. After all, the British pound is being moved based upon the latest headlines when it comes down to the EU referendum vote going on in the United Kingdom. That vote comes out today, and I would not be surprise at all to see some of those who were bullish in this market taking profits as not only are we overly exhausted, a “leave” vote could send things to the downside rather rapidly and as a result we could find this market crashing all the way down to the 1.45 handle. Beyond that, we could go much lower and reach towards the bottom of the gap which is the 1.4350 region.

On the other hand, if we break above the 1.48 level that would be very bullish but I think that I would be very hesitant to buy this market unless we had some type of announcement that was very bullish for the British staying within the European Union. After all, it would be very difficult for the market to continue to see bullish pressure without some type of good news, because there so much extreme bullish pressure in this market already, so you have to begin to question whether or not there’s anybody left to buy this pair. In fact, there’s also the possibility that we get a “sell the news” type of situation where we get an initial rally if the British stay within the European Union, only to see the market turn right back around. Ultimately, this is a market that is going to be dangerous and it seems that the Forex brokers around the world agree with me. They are all raising margin levels to take trades in the British pound going forward, as the market could produce fireworks. 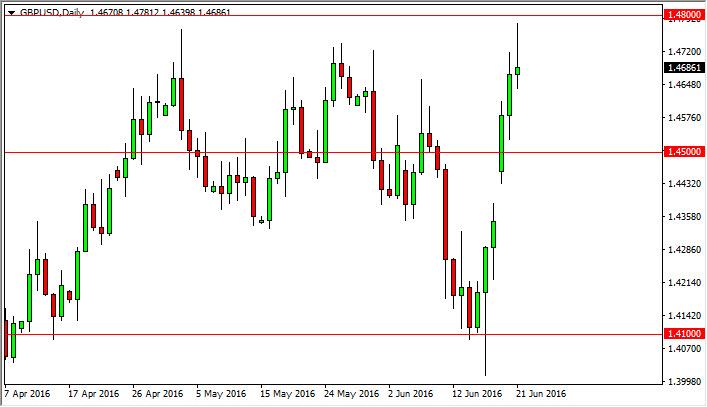