EUR/USD pair fell during the course of the session on Tuesday, slicing below the 1.09 level. Because of this, we feel the market is ready to go much lower, probably heading towards the lows of the 1.06 handle, or even the lows at the 1.05 handle. Even though we broke down below the 1.10 level previously, Monday was Memorial Day in the United States as well as a bank holiday in the United Kingdom. Because of this, it appears to us that the market made a real decision on Tuesday. With that, we believe that the sellers will come back into the marketplace again and again, as we are starting to focus on the interest-rate aspects of both currencies and more importantly, central bankers.

The Federal Reserve is expected to raise interest rates long before the European Central Bank, and as a result it appears that the Euro will continue to have a bit of an anchor round its neck. Because of this, the Euro will continue to struggle. However, the European numbers are a bit better than once expected. With that, the market should continue to be one that faces a lot of volatility because of all of the massive crosscurrents.

We believe that as long as the market stays below the 1.10 level, it’s very likely that we will search out the lows that we had had recently. Perhaps we are starting to form a larger consolidation area between the 1.05 level on the bottom, and the 1.15 level on the top? At this point in time it’s a bit too early to tell, but this is very likely one of the scenarios that longer-term traders are looking at.

In the short-term, we believe that short-term traders will sell every time this market rallies. That’s at least until we get well above the 1.10 level which of course would show a shift in momentum yet again. This is a market that tends to be very volatile in general. This is especially true because of all of the moving parts and of course the headlines coming out of places like Greece, the Federal Reserve, and the commodity markets. 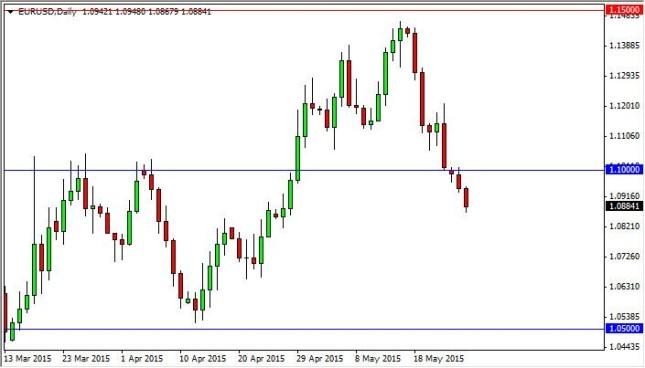