The EUR/USD pair initially broke higher during the course of the day on Thursday as rumors have sent quite a bit of speculation into this market due to the fact that they are essentially saying that the United Kingdom will more than likely stay within the European Union. Ultimately, this is a candle that suggests that the sellers have returned though, as we pullback rather rapidly and formed a bit of a shooting star. This point in time, expect quite a bit of volatility and once we get the announcement we will more than likely make a more significant move, with the Euro gaining if good news comes out of the United Kingdom as far as the “remain” vote is concerned.

On the other hand, if the market gets the answer of “believe”, it’s likely that the Euro and the Pound will both be falling in reaction. However, I think that there is enough noise in this pair overall that this market will more than likely just bounce around as there is also the possibility that central banks around the world will continue to flood the market with liquidity. The central banks will more than likely continue to try to support markets in general, so a sudden move will probably be muted by central bank intervention. With that being the case, I think that a lot of people are going to be disappointed as they are expecting the hit a “home run” when it comes to the markets. That being the case, the market will continue to chop around even if there is a clear direction as to where wants to go. I think that the market would more than likely disappoint those who are trying to play massive amounts of momentum but I do think that will given enough time we should get a longer-term signal, but that is above the 1.15 level, or below the 1.10 level. In the meantime, expect a lot of danger when it comes to this market. Because of this, I am trading smaller positions than usual. 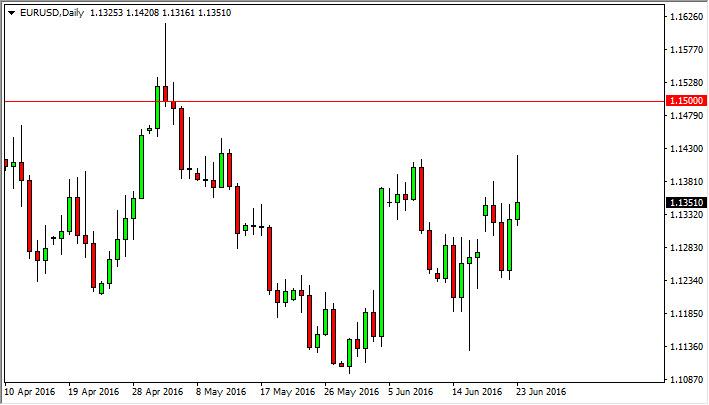