The Australian dollar initially fell during the day on Monday, but did in doubt turning back around to form a bit of a hammer. By doing so, and more importantly bouncing off of the 0.73 level below, I believe that this market is getting ready to break out to the upside. If we can clear the 0.74 level to the upside, I believe that this market will continue to go much higher, perhaps reaching towards the 0.75 level.

Given enough time, I do believe that is what’s going to happen, and I believe that the Friday candle was a signal that we have been waiting for that suggests we are going to go much higher over the longer term. Pay attention to the gold markets, which of course has quite a bit of influence on the Austrian dollar going forward, and with that being the case if we can rally over in that market, specifically the $1250 level, I believe that it will force the Australian dollar higher given enough time.

Looking at another market, the US Dollar Index, it appears that the US dollar is going to continue to struggle going forward, and that will translate into a higher AUD/USD pair as well. Because of this, I have no interest whatsoever in selling this market, and believe that it is only a matter of time before we believe enough momentum to continue going much higher. In fact, this could end up being a “buy-and-hold” type of move just waiting to happen.

I believe that the 0.73 level will essentially be the “floor” in this marketplace. I think that there is a massive amount of support below, extending all the way down to the 0.7150 handle, and with that being the case although it could be volatile, the market should continue to go much higher. My longer-term target is the 0.7850 level, and then possibly even the 0.80 level after that. Nonetheless, one thing you can probably expect in this market is volatility more than anything else, has we had been selling off so drastically over the last several months. 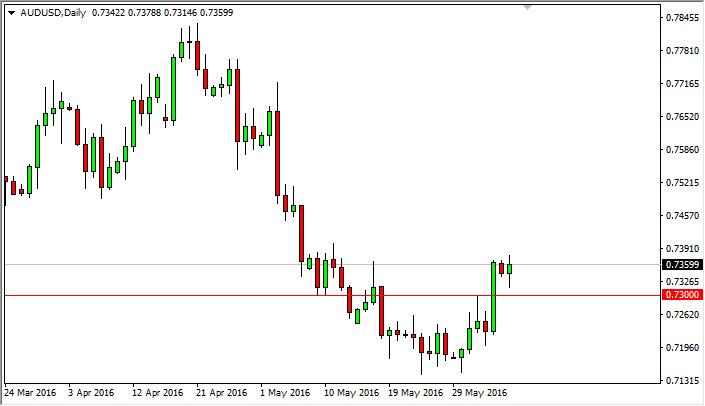