The AUD/USD pair initially fell during the course of the session on Tuesday, testing the 0.75 level for support. We believe that the support extends all the way down to the 0.74 level, and with that being the case it’s very difficult to imagine a scenario in which this pair should be sold, leased as long as we stay above the 0.74 level. Ultimately, any type of pullback from here that shows signs of support, we are buyers as the Australian dollar has looks very healthy for some time now.

During the day, we got a massive bounce and it of course looks very healthy as we have reached very close to the 0.7650 level. If we can break above there, the market will continue to go higher, probably reaching towards the 0.80 level, which has been an important level on the longer-term charts as it was the scene of a major breakout during the year before the financial crisis. Ultimately, it will take quite a bit of momentum to break above there, so having said that we may have to attempt that level several times.

Gold markets look very healthy as well, so you have to keep in mind that the greatest influence of the Australian dollar is often the gold market, so with that being the case it’s very likely that as gold goes higher the Australian dollar will have quite a bit of bullish pressure on it, and with that being the case the markets should move in congruence.

We could see quite a bit of volatility in this market, but with the Federal Reserve looking very much like a central bank that is getting ready to step away from some of the interest-rate hikes expected during the year 2016, it makes a lot of sense that the US dollar continues to soften quite a bit, especially against a gold related currency such as the Australian dollar. Ultimately, pullbacks continue to be value that we can buy again and again in our opinion as there is no reason to reverse course at this point. 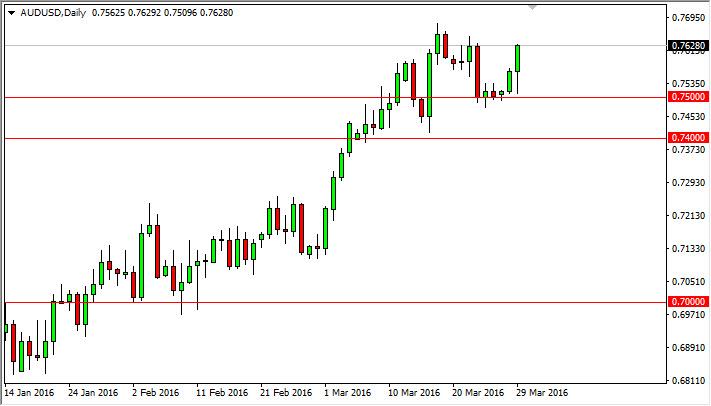