The AUD/USD pair broke down and below the bottom of the shooting star from the previous session on Friday. This is a very negative sign, and as a result it looks as if the market is ready to continue going lower. Quite frankly, we not only believe that the 0.70 level will be targeted, but also have the market should continue to go much lower because of the fact that gold isn’t even pretending the help the Australian dollar to moment, which is something that’s very uncommon. Ultimately, this means that the markets are probably paying more attention to Asia and the lack of growth in that continent than they are the commodity markets. If that’s the case, keep in mind that Australian tends to provide most of the raw materials to Asia, so as the Asian economies go, so does the Australian economy.

The length of the candle is pretty significant, and on the weekly chart we have a nice shooting star. As far as weekly signals are concerned, below the 0.70 level things get really interesting to the downside and quite frankly at that point we feel that this market will probably try to get down to the 0.68 handle in the end lower than that given enough time. The 0.65 level would be the next natural target, and at this point in time as long as we are below the uptrend line that previously held this market higher, we are sellers only as it means that we are still very much in the downtrend that we have been in for some time. The US dollar should continue to get a bit of a bid anyway, as there is a lot of concern out there because the global economies in general.

If we did break above the shooting star from the Thursday session, at that point in time we would have to be very bullish, but the fact that we close the very bottom of the range for the Friday session tells us that it’s very likely we get continuation going forward. 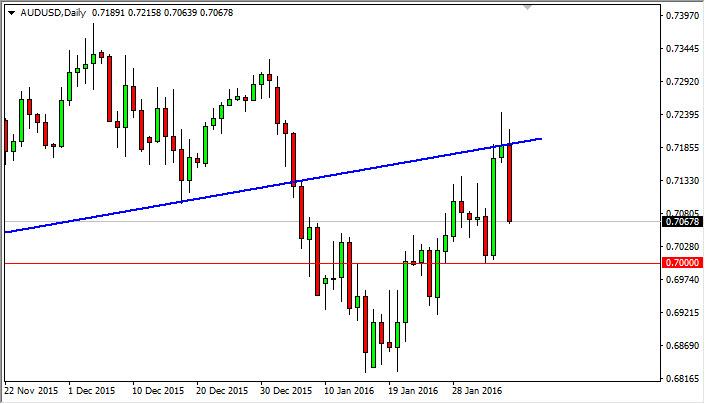