The USD/JPY pair initially fell during the day on Monday, but found enough support just above the 120 handle the turn things around and form a bit of a hammer. This hammer of course is a bullish sign, and if we can break above the top of it we feel that this market will continue to the upside. After all, this is a market that has been in a massive uptrend on the longer-term charts lately, even though we have sold off over the last couple of weeks. Quite frankly, the 120 level is a large, round, handle that we have noticed support and resistance at several times. Because of that, we think that “market memory” should get the market going to the upside just based upon the fact that we have seen this area several times act as an entry point.

We believe that the pair will eventually go higher based upon the divergence of monetary policies between the central banks. After all, the Bank of Japan is light years away from doing anything remotely close to tightening monetary policy, while the Federal Reserve will have to raise interest-rate. What could really get this market moving is the accompanying statement this week, as it could suggest whether or not the Americans have to raise interest rates anytime soon. Quite rightly, and unless the statement almost explicitly says that they are not raising interest rates for an extended amount of time, it’s more than likely that this market will react positively.

The 120 level has a significant amount of support just below it as well, extending all the way down to the 118.50 level. With that being the case, selling is impossible. 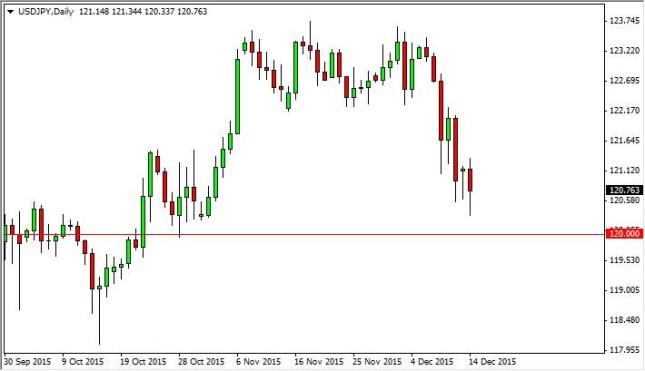