At this point in time, we believe it’s pretty much a foregone conclusion that the market is going to reach down to the 1.05 handle. However, there isn’t much in the way of room between here and there so we believe that shorting this market off of short-term time frames will be about the only way to go. We would welcome a rally, simply because it would offer “value” in the US dollar, but until we get one we will have to stick to the altar small moves. If we can break below the 1.05 level, at that point in time we would have to start thinking about parity between these two currencies.

Keep in mind that the European Central Bank has suggested recently that the stimulus could be increased, and that of course is tantamount to quantitative easing. This brings down the value of the Euro as bonds will pay much less in the way of interest rates.

On the other side the Atlantic Ocean, you have the Federal Reserve which may be in the situation of raising interest rates fairly soon, possibly even this month. After all, the most recent jobs number was extraordinarily strong, and that makes this Friday’s jobs number extraordinarily important as it could be a precursor to what happens next. The previous number was twice as strong as anticipated, which of course shocked the markets.

If we get another such a strong number, it will all but be confirmed that the Federal Reserve will have to raise interest rates, and that should continue to fuel the strength of the US dollar as the industry differential will shrink if not disappear. Ultimately, it is probably only a matter of time before we break down but we could get a bit of a bounce between here and there. Those bounces again invite selling, and most certainly a break down below the round figure out will .05 does the same. It is not until we break above the 1.10 level at this point that we are considering going long of this market. 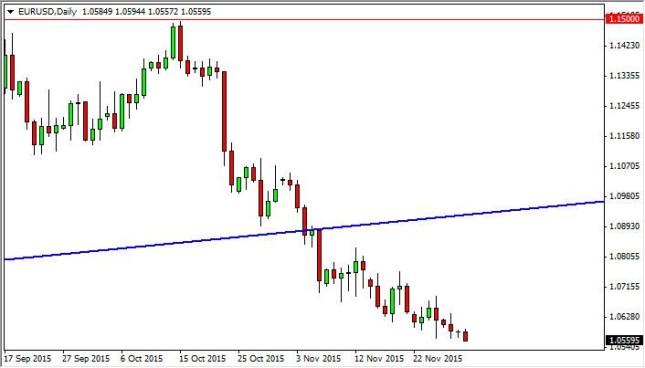