The EUR/USD pair went back and forth during the course of the day on Monday, bouncing off of the trend line most importantly. This is a trend line that we at FX Empire have been following, as we see a decent ascending triangle on the longer-term charts. The fact that we bounced and formed a hammer is a very positive sign, so a bit of a countertrend play could be about to happen. On a break above the top of the hammer, we feel that this market probably reaches towards the 1.12 handle. We would be quick to take profits though, because of course the fact that we have seen such a massive selloff lately. With that, you have to keep in mind that the European Central Bank suggested that more stimulus could be coming. That of course is very negative for the Euro in general, and as a result it does make this a bit of a precarious position to be in.

On the other hand, you have to believe that the market’s reaction to that was probably a bit overdone. With this, the market has to think about whether or not the Federal Reserve can raise interest rates anytime soon either. Because of this, we believe that there will be a lot of volatility in this pair. After all, the Federal Reserve and the ECB have both basically stepped away from any type of hawkish as, and now we have to think that the markets will simply grind back and forth over the longer term.

Looking at the longer-term charts, the ascending triangle of course is still intact, and that is a very bullish sign. However, we still have quite a while before we have to break out to the upside to trigger that potential longer-term “buy-and-hold” type of situation, so expect a lot of aggravation between now and then. In the meantime though, it does look like there is a short-term buying opportunity. On the other hand though, if we break down below the 1.0975 level, the market will more than likely drop to the 1.08 handle. 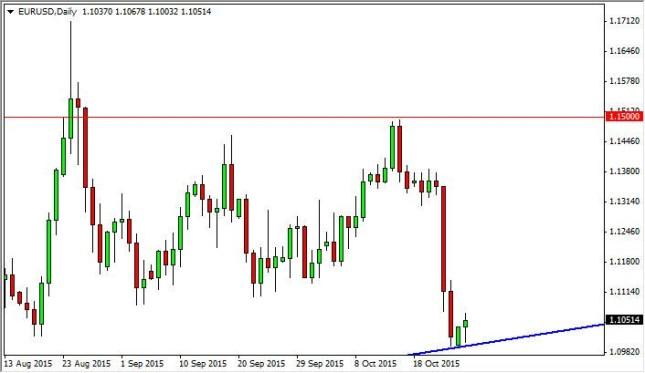