The USD/CAD pair fell rather significantly during the course of the day on Tuesday, but turned back around to show signs of resiliency near the 1.29 level. With that, the market looks as if it is ready to continue to consolidate in this general vicinity, and as a result we believe that we are trying to build up a little bit of a base. However, you have to keep in mind that the Bank of Canada has an interest rate announcement today, so it could cause quite a bit of volatility in this particular general vicinity.

A supportive candle would of course be a buying opportunity for us, and we believe that the support runs all the way down to the 1.28 handle. That is as far as we can see a bit of a trend change to the downside yet again, if we can break down below there and close below there on the daily chart. Ultimately though, we think that the support below will more than likely hold up.

Keep in mind that the Bank of Canada has not only an interest rate announcement during the day, but more importantly a statement after that announcement. The statement could give us a little bit of insight as to what the Canadians believe, not only about Canada itself but also the rest of the world. This could have an effect on risk appetite in general, and if they show signs of dovish behavior, this pair should go higher. Ultimately, we believe that is what’s going to happen but we also recognize that there is a significant amount of noise during the announcement, so quite frankly it is a bit difficult to do beforehand.

Ultimately, we believe that this market will reach towards the 1.33 handle, but the one thing that we are sure of is that there will be a lot of volatility. This pair has sold off quite drastically lately, and quite frankly in our opinion it’s a bit overdone at this point in time. The Canadian central bank will probably say things to be as dovish as possible. 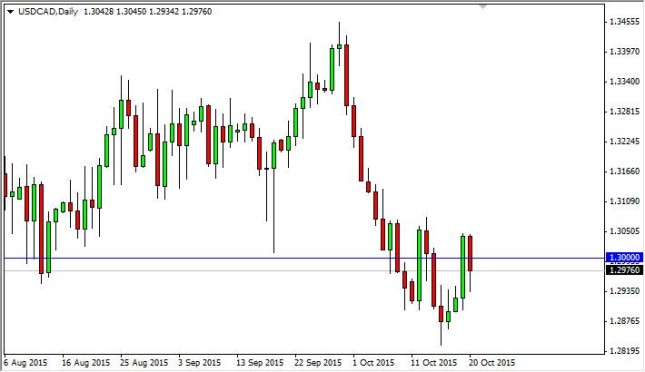