The USD/CAD pair initially broke down during the course of the day on Wednesday, slicing through the 1.30 level. This is an area that we have been talking about for some time as being vital, and with that it is very interesting to watch this market now. It to keep in mind that the Canadian dollar has strengthened quite drastically over the last week or so, gaining over 400 pips against the US dollar. That is a huge move needless to say, especially considering that the market has been grinding higher for quite some time.

Part of the reason is that the Federal Reserve did not raise interest rates last time. That of course was pretty counterintuitive consider most people had at least one rate hike baked in at this point in time. On top of that, they suggested that it might be a while before they do so. That of course has worked against the value the US dollar. Ironically, at first it was positive because there were fears about global markets and global economies as the Federal Reserve essentially stated so.

Looking at the chart though, you can see that we formed a bit of a hammer and that of course is a bullish sign. At the same time, the WTI Crude Oil market trying to break above the $50 level, but failed. It ended up forming a shooting star, and as a result it is very negative. Do not forget that there is a strong correlation between the Canadian dollar and the oil markets, and as a result as oil gets more expensive, the Canadian dollar typically does better. However, don’t get too hung up on a correlation, as they don’t have to work together.

With that being the case, we look at this chart and recognize that we should get a bit of a boost to the US dollar. On a break above the top of the candle, we are buyers and aiming for the 1.32 level. If we break down below the bottom of the candle for the session on Wednesday, that of course would be very negative. 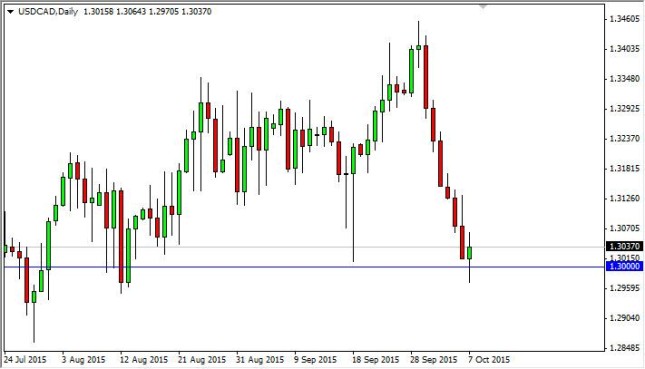