The USD/CAD pair fell during most of the session on Monday as the oil markets perked up slightly. However, by the end of the trading day most major oil markets gave back roughly half of the gains, which coincide nicely with the hammer that formed in this particular pair. Remember, this pair typically will move inverse of oil markets, especially the light sweet crude. As the light sweet crude rose during the session, this pair of course fell, and even broke below the 1.02 handle. However, as soon as the oil markets started to selloff, this pair started gaining.

The 1.02 level is a minor support level, but it is in the bigger context of the breakout at the 1.01 level that we look at this chart. After all, that was a significant move higher, and we do believe that there is more coming eventually. Looking at the Canadian economy is far too tied to the United States, which although doing better, isn’t exactly doing great. Canadian economic numbers have been a real mixed bag, and as long as that’s the case there will be a bit of selling when it comes to all things Canada.

Ultimately, we think this is more or less going to be consolidation in a sideways trend for the short term, as we think the breakout needed a bit of a rest. The buyers will eventually want to step back in though, and with the shenanigans going on in Europe involving Cyprus, it’s not a real stretch to imagine money coming into the United States as a way of seeking a safe haven.

Naturally, you will have to watch the oil markets in general to trade this market. However, we believe that the oil markets are in somewhat of a range, and if that’s the case it will only have a bit of a limited effect on this market. We think that a break of the highs for the session on Monday would be a strong enough signal to consider buying this market, thinking that the 1.03 level will be challenged. 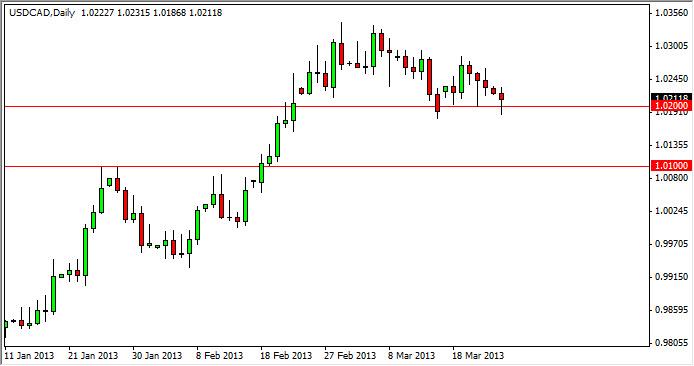