The GBP/USD pair had an extraordinarily strong session during the Thursday hours as we smashed through the 1.50 level, breaking through a couple of fairly significant resistance areas. However, the rally may have overextended itself as there is quite a bit of resistance just above current levels. It appears that the 1.51 level will offer a significant amount of resistance, as the market could not go through it for any length of time.

We also see that there is a significant amount of resistance potential all the way up to the 1.53 area. It is because of this that we feel that this “breakout” may actually end up being a nice selling opportunity in the long-term. The situation in Great Britain has not changed, nor has the situation in the United States. In a lot of ways, this was kind of a “phantom rally” as it appears to have been a reaction to the better than expected unemployment number out of the US. Lately, this has been a very pro-dollar type of announcement, but it did do a complete 180 during the Thursday session.

Looking at this chart though, it is most certainly be down, and the trend is without a doubt down. We don’t think that enough has changed around the world to consider that the trend will have changed, and as a result we will not buy this market until we get past our original buy trigger at the 1.53 level. It isn’t until we get above that level that we clear all of the noise that sent this market down.

On the other hand, if we get a resistive candle somewhere in this vicinity, we are more than willing to take another shot at selling this market. This could simply be a wind up to break down even lower. No market runs in one direction forever, and as a result this may have simply been a demonstration of that rule. We believe that the 1.45 level is still going to be targeted, although it may take something fairly special to get there. 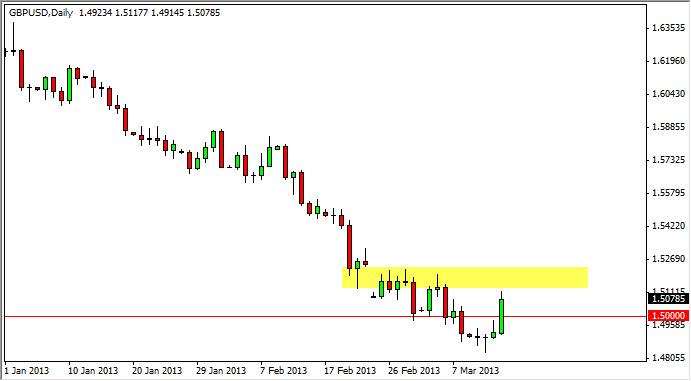