The USD/JPY pair broke above the 95 handle during the session on Friday, after the United States announced that it had added 265,000 jobs in the month of February. This is a typical “risk on” type of move in this pair, as well as following the recent trend higher.

Now that the 95 handle has been broken, we feel that the market will eventually target the 100 handle. In fact, during the session on Friday we managed to pierce and close slightly above the 96 handle, showing true conviction in the move higher. Because of this, we are already long of this market, and will look to add yet again as strength keeps entering this market.

The Bank of Japan is still on the other side of this trading willing to work against the value of the Yen going forward, so we believe that this move continues. The Japanese economy has suffered at the hands of and ever strengthening Yen and this move will certainly be welcomed by the all-important export sector of the Japanese economy. Simply put, the value of the Yen was pricing the Japanese export sector out of the market.

Going forward, we think that this market will continue to show great strength, and the fact that the Federal Reserve looks to have absolutely no qualms about this pair strengthening suggests that it can go much higher and in very rapid manner. After all, the Federal Reserve Chairman Ben Bernanke recently stated that he agreed 100% with what the Japanese are going to inflate their economy and this by extension means that he is okay with the Dollar rising in value against the Yen. With that being the case, this could very well quickly becoming one way battle as the Japanese look to devalue and the Americans ignore it.

Going forward, we feel that buying on dips will continue to offer value, and that this is the beginning of a multi-year trend that will go on much longer than most people anticipate, or can even imagine. Believe it or not, this pair rising over time can often be a sign of economic strength, and the norm. 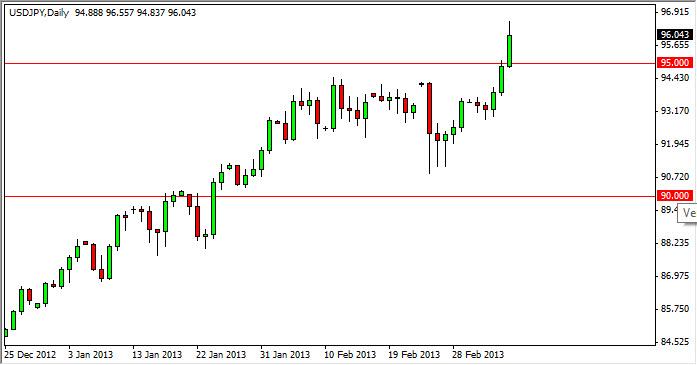