The GBP/USD pair fell below the 1.50 level during the session on Wednesday, which of course is a significant support level. We believe that this level will open the way for a much lower exchange rate in this market. Cable is notoriously volatile during economic turmoil, and although we do not have that it should be stated that the Bank of England should be ultra-easy and could possibly even mention further asset purchases, which of course would be negative for the Pound.

On top of that, the US dollar has been gaining strength in general against most currencies. In fact, the US Dollar Index looks extraordinarily strong and ready to keep running higher. With that being the case, we are not selling the US dollar against any currency at this point in time, and believe that the problems for the Pound continue going forward.

The next central bank governor for the Bank of England, Mark Carney, and is presently the head of the Bank of Canada. That particular central bank sounds ultra-dovish, and the leader of that bank has already shown that he has no qualms about being so in London. If that’s the case, this market should continue much lower as the trading community continues to anticipate lower rates, and more central bank printing.

Looking forward, until the United Kingdom has stronger economic numbers coming out; it’s hard to believe that there will be a lot of demand for the Pound. While the easiest part for the sellers has already been taken care of, we still think that this market could drift down to the 1.45 handle over the next several months. Going forward, there will come a time to start buying the Pound, but we have blown through several major support areas before, and there is nothing on this chart that suggests that we are about to turn and changed momentum completely, which is exactly what it would take in order to start buying this market. With all things being equal, we are very bearish of this market and would not be able to start buying until we got above the 1.53 level. A break of the lows of the Wednesday session would be enough to have a start selling. 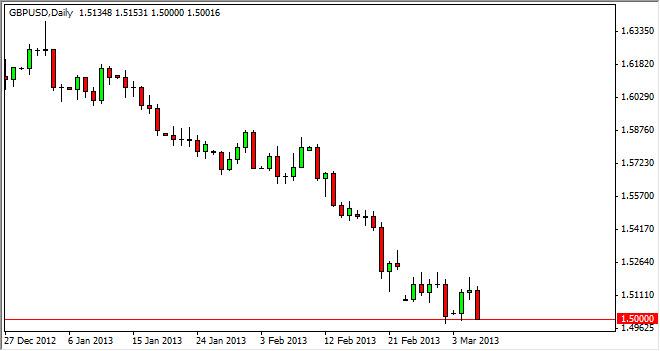