The USD/CAD pair fell during the session on Thursday and even managed to break down below the 0.99 handle. However, we got a nice bounce from that area and it does look like the market is closing with a hammer for the session. This sets up an interesting scenario as the nonfarm payroll announcement comes out today. This pair does tend to move with this economic announcement, and it appears that perhaps the market is expecting a weak employment number.

We think that if we break the top of the hammer for the session on Thursday, we could see a significant bounce up to at least the 0.9950 handle if not the parity level. If we can get above the 1.0050 level on a daily close, we would not only feel that this pair is bullish at that point, but could be running as high as 1.04 over the near-term.

Alternately, if we managed to break the bottom of the hammer for the Thursday session we feel that this would be a signal to start selling this pair. This more than likely will be predicated upon a stronger than expected jobs report, as money would flow out of the relative safety of the United States and go around the world to look for yield. Canada is most certainly one of the stops, especially considering how many commodities that the Canadians export every year.

With this being said, we are selling south of the candlestick for Thursday, and buying on a break above the highs for the session. We do not think that a buy order will lead to some type of massive melt up, but we do see the range that we are currently trading and as a nice guide for which direction and how long to go into a trade. 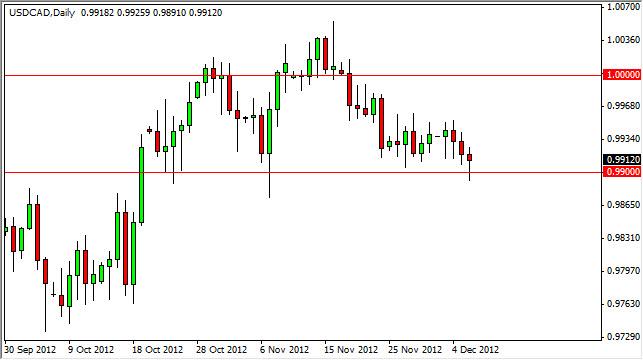