The AUD/USD pair rose during the session on Thursday, to test the 1.04 handle. This area is the “middle” of the consolidation area that we currently see between 1.06 and the 1.02 handles.

With this in mind, we feel that this is a bit of a difficult trade at the moment as we are simply between the two extremes, and therefore could go either way.

If the market does not make it to the 1.06 handle however, this would be a significantly bearish signal in this currency pair. This is because quite often you will see a failure to return towards the top before a consolidation area let’s go and send prices much lower. We are certainly in an environment where this could happen, so keep this in mind please.

Looking at the charts currently, we certainly see that the 1.0180 handle will be an area of great interest. It seems that the line in the sand is roughly that level, and as such a move below it would of course have this market falling much quicker. In fact, the 400 pips rectangle that currently forms the consolidation area being broke would suggest a move down to the 0.98 handle roughly.

With the Federal Reserve seemingly willing to endlessly print currency, it would make sense that the Australian dollar would continue to gain over the US dollar for the long term. However, it is widely expected that the Reserve Bank of Australia will cut rates twice between now and the end of winter. If that’s the case, this pair could struggle to gain even in a scenario where commodities are going higher. It’s not that we expect a meltdown, but we could expect a bit of a struggle out of Australia.

As long as the Australians are so tied to the Chinese economy, they will be held hostage to the GDP numbers out of that country. Currently, it is relatively weak (at least as far as China is concerned) and this of course will have traders concerned about Australian exports to the mainland. However, there is still a significant amount of growth in that country and we think in the long term the Australian dollar will hold up relatively well. Nonetheless, if you’re looking to play the commodity trade we would think that the New Zealand dollar and Canadian dollar should both outperform the Australian dollar. 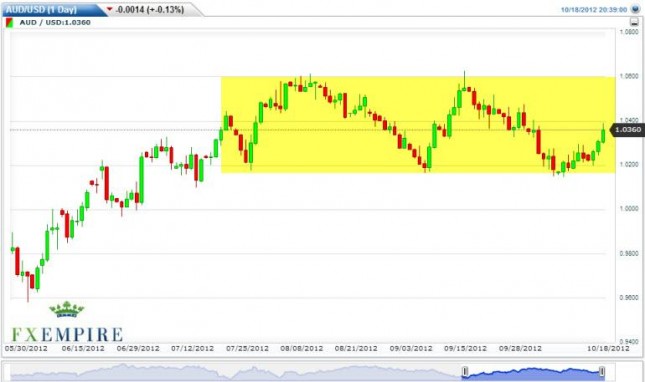