Since the start of 2017, crypto-currencies dominated the global market with huge gains and every trader / investor is buying these assets or looking to exchange it against each other . We pointed out last year to the potential rise of Bitcoin and recently explained how Ethereum is leading the move to the upside, but Ripple has been lagging the recent move so let’s see if it will be able to catch up .

XRP is the native currency of ripple and only exists within the network, so we’ll be using XRP/USD and compare it to both BTCUSD & ETHUSD.

XRPUSD had a significant peak on 05/17 and then dropped for 70% before placing a low on 05/27 same as the rest of crypto-currencies. Since then Ripple only saw a shallow bounce before staying sideways to lower, while ETHUSD saw an impressive +200% increase in value compared to +45% for Bitcoin.

Despite the 40% drop since June the 1st , XRPUSD is reaching a short term extreme area at equal legs ( $0.2324 – $0.1893 which will provide a floor as buyers are expected to show up for a 3 waves bounce at least from there. The Instrument already ended a double three correction at 05/27 low ( $0.1190 ), so while the instrument stays above that level then it should be able to rally for new all time highs with a minimum target at $0.55 area. 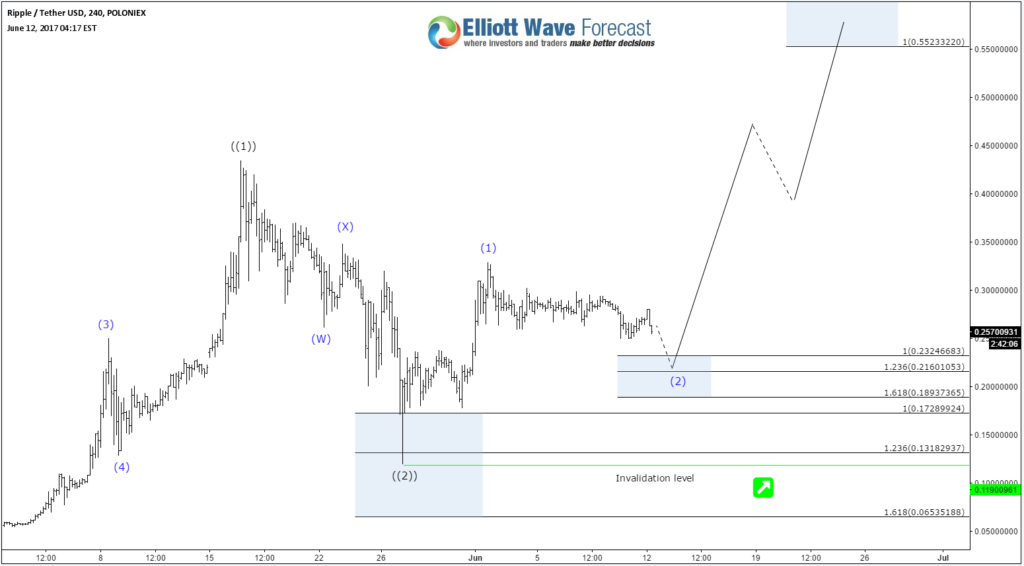 The Ripple protocol has been increasingly adopted by banks and payment networks as settlement infrastructure technology , it’s system have a number of advantages over other cryptocurrencies, that’s why it’s being used by companies such as UniCredit, UBS & Santander. So the digital coin looks to have a bright future as it will be implemented in the financial system and despite its current low price it can catch up the move to the upside really quickly.