The GBP/USD pair initially tried to rally during the day on Wednesday, but struggled again at the 1.48 level. It is obvious that the 1.48 level has become a significant resistance barrier, and if we can break above there it’s likely that the market will continue to go higher. On the other hand, if we break down below the bottom of the shooting star from both Tuesday and Wednesday, the market could very well fall to fill the gap that formed at the beginning of the week.

Obviously, there are a lot of moving pieces at this point in time, as the United Kingdom is currently voting as to whether or not to stay in the European Union today. While we will not get the answers until tomorrow, the reality is that there will be exit polls and rumors coming out during the day today that will move the British pound in general. This is going to be a very difficult market to trade, and quite frankly could chop up a lot of traders. Because of this, you will have to be very careful about position sizing, and perhaps could even benefit from trading options as opposed to spot Forex market positions.

If we do fall, the gap could get filled which is all the way down to the 1.4350 handle. Obviously, the markets will be heavily influenced by the outcome of the vote, so having said that this could be the turning point for the British pound over the course of the next several months, if not years. Ultimately, there will be a knee-jerk reaction regardless of what the outcome is, so longer-term traders will of course be waiting to see a longer-term opportunity. The volatility could be extraordinary over the next couple of sessions, and one would have to believe that the British pound would strengthen if they stay within the European Union. On the other hand, if they choose to leave the EU, the British pound will more than likely sell off. At that point, I believe that longer-term we will find value in the British pound, but the volatility in the downward pressure could last for a wild. 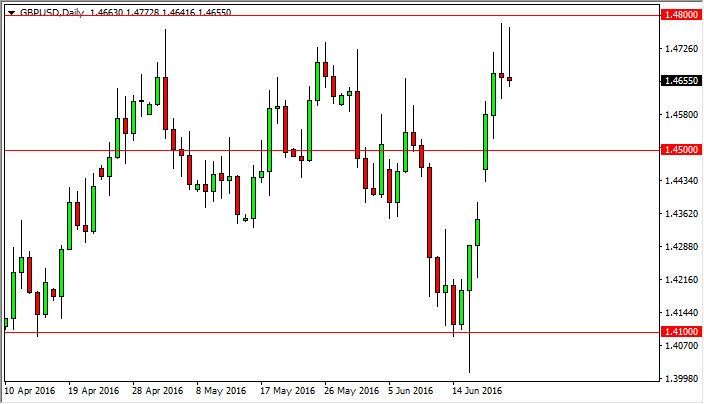