The GBP/USD pair initially fell during the course of the day and then turn right back around to break out to the upside. However, there is still more than enough resistance at the 1.48 level to keep this market somewhat soft, and this was initially a “knee-jerk reaction” to the latest polling data out of the UK when it comes to the EU referendum. In other words, if the next polls suggest that the United Kingdom is leaving the European Union, this pair will turn right back around. I believe that it is very difficult to trade this market right now, and even more difficult to hang onto the trade for any real length of time. We are overextended, and an exhaustive candle will more than likely open the door to more selling.

If we break above the 1.48 level, that would be an extraordinarily bullish sign, and should send this market looking for the large round number of 1.50 ahead. I would be very leery of buying this pair ahead of the EU referendum vote, but I would have to admit that a break above the 1.48 level would be very strong. I think that we will see several swings back and forth over the next couple of days, and believe that a short-term selling opportunity could present itself due to the exhaustion if we get an exhaustive candle. However, I would not be willing to hang onto that trade for any real length of time as just a few choice words could change everything yet again.

Ultimately, markets do tend to try to fill the gap as it appears, so therefore it makes sense that we would fall on top of the fact that we are overextended. Ultimately though, this market will be one that will literally be one of the most dangerous places to trade. After all, you have to keep in mind that the Federal Reserve is in a very interesting place as there is concerns about what can be done when it comes to interest-rate decisions with the poor jobs number. 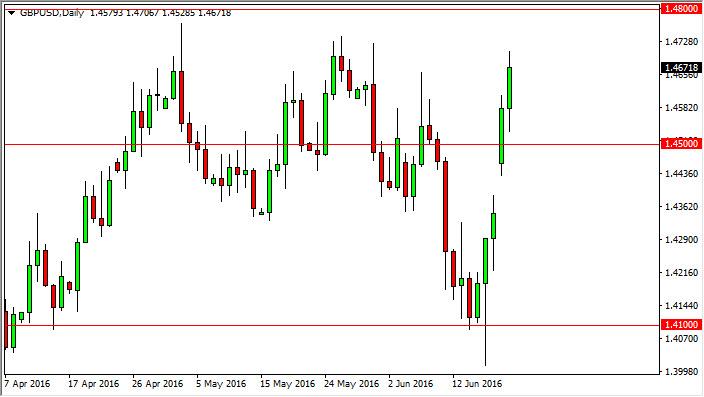