The AUD/USD pair fell rather significantly during the day on Monday, as we continue to see a selloff against the Australian currency. The 0.73 level below is a large, round, psychologically significant number, but more importantly it has also been rather resistive in the past. Because of this, it makes a lot of sense that we could see some type of bounce from here, which of course is necessary sometimes when you get this type of a massive move lower. After all, you have to keep in mind that the Reserve Bank of Australia recently cut rates in a bit of a surprise move, and we have dropped 3 handle since then. That’s not necessarily uncommon, and with that being the case it’s very likely that we could continue to drop.

This area causing a bounce though could end up being a nice opportunity to start shorting this market again, especially on exhaustive candles that reach towards the 0.75 level as it was previously supportive, it should now be massively resistive. Also, you have to keep in mind that gold can heavily influence the Australian dollar, and as it goes higher, typically the Australian dollar should go higher as well. However, sometimes the 2 markets will completely ignore each other. In this particular case, we may see them ignore each other, because of the fact that the Reserve Bank of Australia cut rates, which of course is a huge factor when it comes to the value of currencies. Also, we have to keep in mind that the Australian dollar can heavily swing one way or the other due to the Asian economies as well, and those are a bit soft at the moment.

Currently, if we can break below the 0.73 level on a daily close, that is probably good enough reason to start selling as well, so at this point we are essentially looking at selling exhaustive candles after short-term rallies, or continuing lowering prices on daily closes. We have no interest whatsoever in buying this market as the buyers are nowhere to be found. 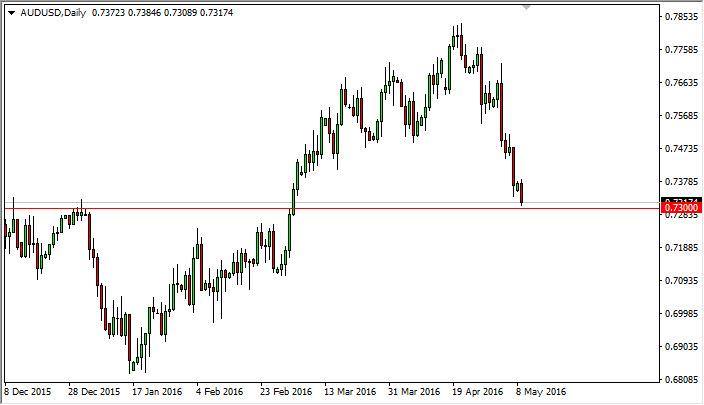