The USD/JPY pair initially fell during the course of the session on Tuesday, reaching towards the 105 level. This is an area that we have been talking about as being extremely important for some time, so having said that there is quite a bit of interest in the fact that we did up forming a hammer. A hammer of course is a very bullish sign and as a result we could very well get a significant bounce from here. I don’t necessarily believe that the market is ready to change trends yet, but buyers of this market will be encouraged by this hammer, and we could very well reach towards the 108 level next. It’s not until we break above the 110 level that I feel that the market will be able to be bought on a longer-term premise. They have seen quite a bit of volatility in this market, so of course traders will be a bit skittish.

Ultimately, break down below the 105 level would be extraordinarily negative. We do not believe that will happen but if it does that should send this market into a bit of a freefall, perhaps back down to the 100 level. At this point, a bounce is probably needed in order to build up momentum to start selling off anyway, so even the sellers will probably be willing to step to the side and allow buying to happen. The pair does tend to have a bit of a risk appetite aspect to it, so pay attention to what the stock markets around the world are doing. Also, you have the issue of the Bank of Japan, as it recently declined to add to quantitative easing, and that’s part of what has caused the surge in the value of the Japanese yen recently. Having said that though, I do believe that the Bank of Japan will eventually do more quantitative easing, so a bit of a “snapback” rally would be very realistic at this point in time. One thing you can count on regardless what happens: volatility. 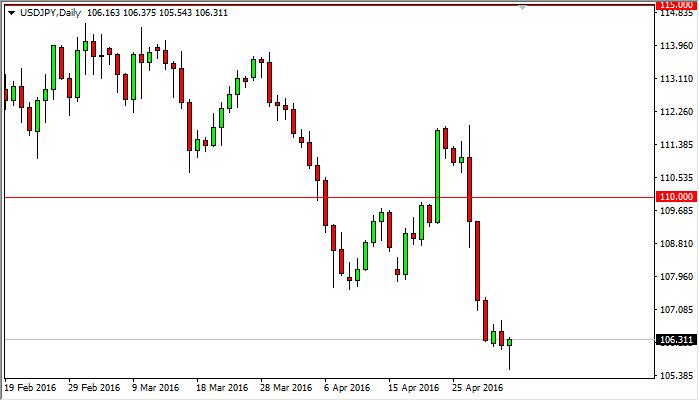