The GBP/USD pair broke above the 1.45 level significantly during the day on Tuesday, which is exactly what we have been waiting for here at FX Empire as a sign of bullish momentum in the British pound continuing. At this point in time, we are not quite ready to call a trend change yet, but it certainly seems like a significant move higher. Because of this move, it’s very likely that the British pound will continue to grind higher, especially considering that we have the FOMC Statement during the session here on Wednesday, which could be very volatile for the US dollar in general, as we have seen quite a bit of softness in the greenback lately. We look at the US Dollar Index, we are treading water above pretty significant support levels, but we have most certainly taken on a bearish tone as of late. This of course should translate into the British pound.

If the 1.45 level can hold as support, this move should continue, and short-term supportive candles could be reason enough to start going long. On the other hand, we could break above the top of the range for the session on Tuesday and that would be reason enough to go long as well. The 1.50 level will be targeted over the longer term, but there will be significant resistance at certain places, such as the 1.48 handle. We have no interest in shorting this market until we break down below the 1.44 handle, which would be a serious breach of support. At that point in time we would more than likely continue to go lower and return to the previous consolidation area if we do break down below there, but right now it does not appear that’s about to happen anytime soon. Today could be a very interesting session in this pair, as the FOMC Statement will certainly give us an idea as to what the Federal Reserve might do with the course of the next several meetings. Expect volatility, but eventually the market will let its intentions known. 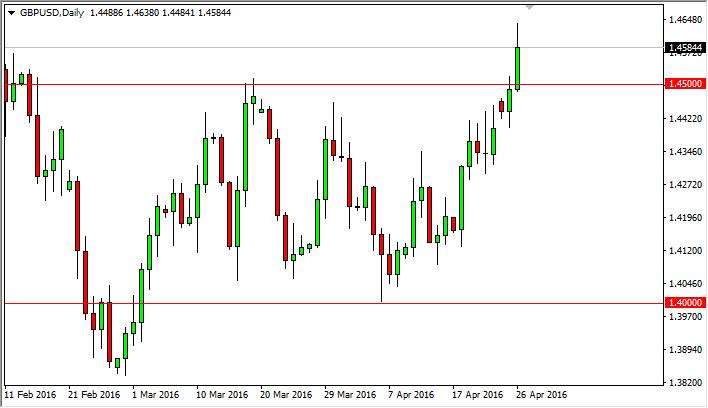