The USD/CAD pair gapped higher at the open on Monday, as word spread that there was no output frees agreement from the oil-producing countries in Qatar over the weekend. That being the case, the market looks as if it is turning around during the course of the session on Monday, and looks like it is trying to continue to go much lower than that. On a break down below the 1.28 level, it’s very likely that this market will continue to go even lower. If that’s the case, the 1.30 level should now be considered the overall “ceiling” in this market, as it has quite a bit of psychological significance. Nonetheless, something serious is about to happen and we need to pay attention to this particular pair.

We are most certainly in a downtrend recently, so it makes sense that we would continue to go lower. The target that we have at this point would be the 1.25 level, and then possibly even lower than that. That being seen see what happens, because there is the crude oil correlation between pricing and the Canadian dollar, so having said that you will have to watch both markets in order to place a trade. Of oil falls, this pair should rally, and of course vice versa.

It does look as if the sellers have taken control yet again, and if we can not only fill this gap, but continue to drive lower, that’s an extraordinarily negative sign to say the least. As far as buying is concerned, we would not do so until we get above the 1.30 level, as that would of course be a very bullish sign and a return to strong momentum. Ultimately, this pair is probably going to make some type of major decision fairly soon, and if that’s the case we could be getting the beginning of a major move in one direction or the other. We will use daily closes in order to make that decision, so therefore will remain very patient as this could be a long-term trade setting up. 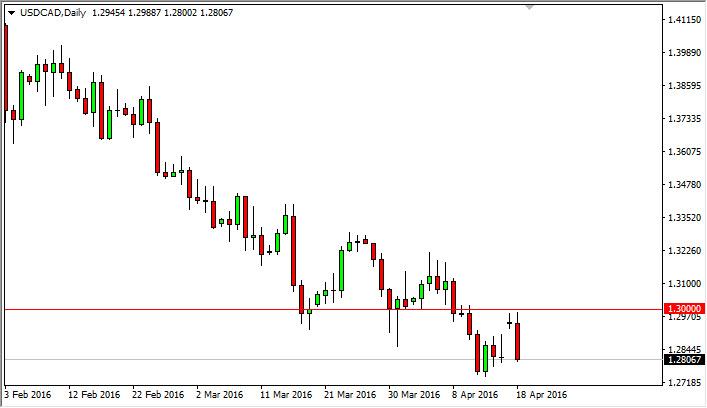