The USD/CAD pair initially fell during the course of the day on Thursday, but found the 1.30 level to be supportive yet again as we bounced and formed a bit of a hammer type candle. Ultimately, the market looks as if it is hanging onto the uptrend line that has been so important lately, and as a result we might be trying to form some type of base for a rally from here, which would continue the uptrend obviously. The market could very easily find relief at this point from the selling pressure due to the fact that the oil markets look like they are ready to roll over, which of course has a massive effect on the Canadian dollar. As oil rises, this pair falls in favor of the Canadian dollar, and as oil falls, this pair tends to turn right back around and rallies.

Looking at this chart, even though we have had a significant pullback, we believe that the market should continue to go higher if we can break above the shooting star that formed on Tuesday. This of course would make a real case for a pickup of strength and bullish momentum, as it would show that we are starting to break through some of the selling pressure that we’ve seen over the last couple of weeks.

We also believe that the uptrend line down the hammer from last week shows just how much tenacity that the markets hanging onto the 1.30 region. Oil markets have formed a very negative candle during the day as well, and that could be the type of congruence that we need to see this market turnaround. The markets will focus on quite a bit of different things, but we cannot help but notice that the reaction in the oil markets in the USD/CAD pair to the stronger than anticipated drawdown of inventory in the crude oil sector announced by the United States yesterday was mild. In other words, markets are starting to look at the long-term and recognize that supply is going to be an issue in oil for some time, and that should eventually work against the Canadian dollar itself. 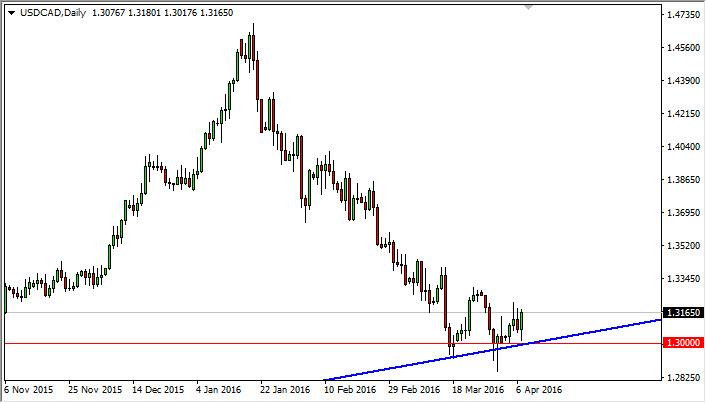