The GBP/USD pair initially fell during the course of the day on Wednesday, but turned right back around to form a bit of a hammer. The hammer of course is one of the most positive candles at you can see on the chart, so I think that it’s possible we could bounce from here. It makes quite a bit of sense though, because the 1.40 level below is a large, round, psychologically significant number. On top of that, that area has been important over the longer term from time to time anyways, so if we break above the top of the hammer during the day on Wednesday, there’s no reason to think that we wouldn’t continue to go higher and perhaps even bounce all the way to the 1.44 handle.

At this point in time, I believe that that would be a short-term bounce that you can take advantage of for a session or so, and I wouldn’t be looking to be married to the position. However, if we broke down below the 1.40 level, I feel that would be extraordinarily bearish of the market would continue to go lower. The real question now is whether or not crazy traders are still concerned about the United Kingdom leaving the European Union. That seems to be the biggest driving force in this market right now, and if you look at the longer-term charts you can see that the British pound has been punished for some while.

If we get a supportive bounce here, it’s possible that it could turn things back around, and that would essentially be a “higher low”, which is the sign of a trend change. However, with a lot of the announcements coming out of London as far as the polls concerning leaving the European Union, we feel that it’s far too close to think that suddenly people will be wanting to buy the British pound for the long-term. With this, we expect a lot of volatility but do recognize that the bounce could be a nice short-term buying opportunity. 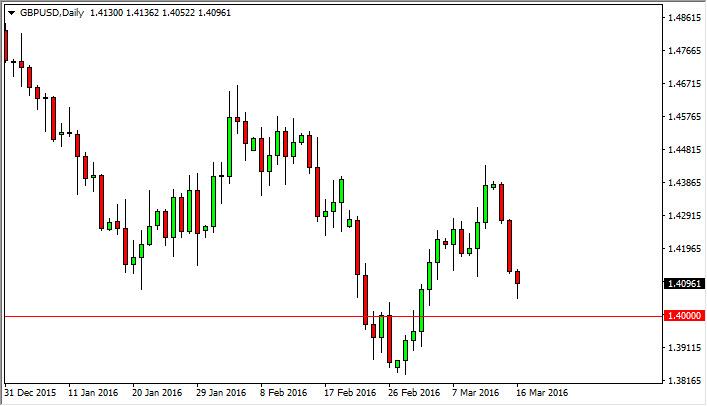