The AUD/USD pair broke higher during the course of the session on Wednesday, breaking above the past couple of shooting stars. Not only that, we have broken above the 0.75 handle, which of course has a certain amount of psychological significance as far as resistance is concerned. Having said that, the market looks as if it is ready to continue to go higher, and even though we are concerned about the market been a little bit overbought, the truth of the matter is that it looks like it’s ready to continue going higher from here. With this, we are buyers on short-term pullbacks and of course a break of the top of the range, and we have to pay attention to the gold markets.

Remember, gold markets tend to move the Aussie dollar in general, and they have looked rather healthy lately. Ironically though, during the session on Wednesday, they did look that’s strong at all. However, we do have a significant amount of support in the general vicinity as far as gold is concerned, so that should only add more upwards pressure to the Australian dollar. Because of this, we don’t have any interest in selling, especially considering that the move has been so substantial and violent. Moves like this are very rarely turned around completely, and was of course is a kind of headline shock around marketplaces.

Ultimately, it looks as if the Australian dollars going to try to reach the 0.80 level, a historically significant support and resistance level. Because of this, you will more than likely have the ability to not only buying this market, but perhaps hang onto the trade going forward. It will be a Rocky move higher, but at the end of the day it should be rather positive.

The only way that we are looking to short this market is if there’s some type of shock to the system, which of course generally makes the US dollar one of the more favored currencies around the world. That of course would have people selling off “risky currencies”, and that would certainly work against the Aussie itself. 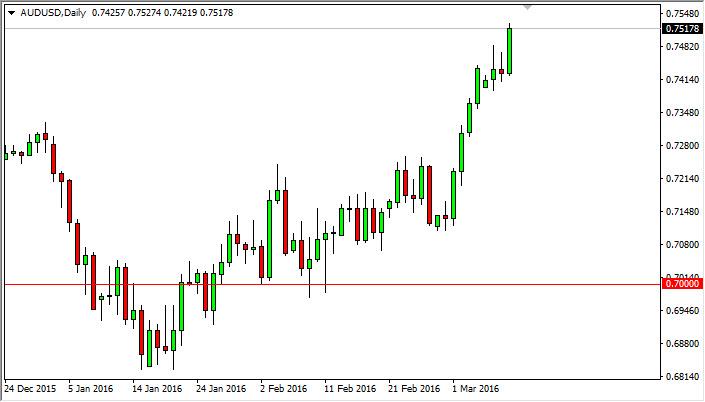