The USD/CAD pair broke higher during the course of the session on Tuesday, as we broke above the top of the hammer on Monday. By doing so, this is considered to be a buy signal, and that the market should continue to reach towards the 1.35 handle. That’s an area that had been supportive, and will now be resistive. However, if we can break above there, the market should continue to go much higher perhaps even as high as the 1.39 handle.

With that being the case, you have to pay attention to the oil markets, which look like they are pulling back to bed. The WTI Crude Oil market fell from the $38 level, as it looks as if the longer-term downtrend could continue to affect the market. On top of that, we get the Crude Oil Inventories number coming out during the day today, and that of course can have a massive effect on what happens in the oil markets. If the oil markets go higher, the Canadian dollar tends to gain strength. However, if the crude oil markets fall, the Canadian dollar loses value as we sold during the Tuesday session.

Ultimately, this is a market that has been in a fairly strong downtrend recently, but when you look at the last couple of years, we are still very positive overall. Granted, this has been a very strong pullback, but ultimately this is a market that broke above the 1.30 level recently, and that of course was a massive resistance barrier. The fact that we got above there is a very strong sign, and of course with the situation in the oil markets being such as they are, it’s only a matter time before shale oil producers get involved in start plowing supply and in the marketplace. In fact, the only is Cushing Oklahoma full of petroleum, but so as Rotterdam, which of course is where the Europeans store massive amounts of crude oil. In other words, there is simply far too much in the way of supply for demand. With that fact, the Canadian dollar will fall over the longer term, meaning that this market should rise eventually. 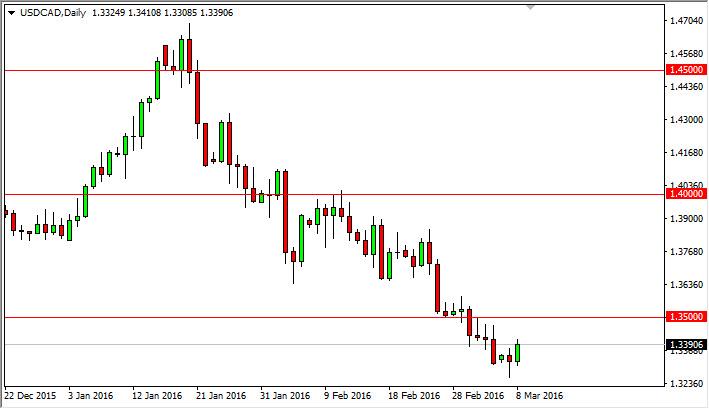