The AUD/USD pair initially dipped lower yet again, but turned back around to form a massively positive candle. Having said that, the market is testing the previous resistance, so it is not time to start buying by any stretch of imagination. We believe that a resistant candle above would be a nice selling opportunity, as the breaking below of the uptrend line previously that was so supportive signals that the market is certainly bearish overall. On top of that, we have not been impressed by the way the Australian dollar has acted in relation to the gold markets, and as a result think that the market could very well be reacting to situations in China and other parts of Asia more than anything else. The session on Tuesday was very kind to the gold markets, so we did get a little bit of a “knock on effect” in this market, but ultimately gold markets have been bullish in general for a bit of time, while the Australian dollar has been lackluster at best.

At this point in time, we feel that the market should continue to find plenty of resistance above, and is not until we break back above the uptrend line that we are willing to start buying. That would not only break above the previous support that should now be resistance, but also would be a clearance of the 61.8% Fibonacci retracement level. In fact, at that point in time we believe that this market might be trying to change trends.

The Royal Bank of New Zealand has an interest rate announcement today, and while at first blush that shouldn’t be a concern, the reality is that the Australian dollar will often move in reaction to what’s going on in New Zealand and vice versa. Because of this, expect some type of volatility but we still believe that selling rallies will more than likely make sense in the fairly near term as the downtrend is most certainly solid at this point in time. On signs of resistance, we believe the market should fall and trying to reach towards the 0.68 level again. 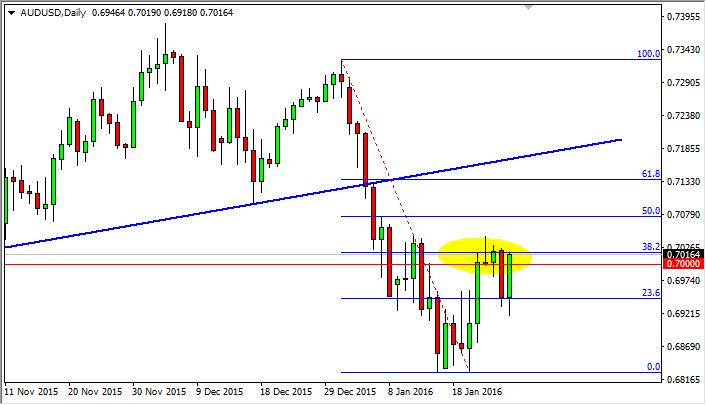