The USD/JPY pair tried to rally during the course of the day on Wednesday, but struggled above the 120 level. Ultimately, we pullback enough to form a shooting star and it now appears that the market simply has no wherewithal to go in one direction or the other. Having said that, this pair tends to be very sensitive to the Nonfarm Payroll Numbers announcement coming out tomorrow, so therefore it makes sense that we do very little today. The better the number, the higher this pair typically will go. We believe that this market will go higher given enough time, and therefore we are bullish overall. However, we do not have the signal to start going long quite yet.

To us, a move above the 121 level would be the signal to start buying. We would recognize 122 just above there as potential resistance though, but once we get above there we feel that the market could go much higher in a relatively short amount of time. At that point in time, we would anticipate that the 125 level would be targeted.

The 125 level is massively resistive, so a break above there is a longer-term signal, but at this point in time it makes sense that this market goes higher. The reason for this of course is the fact that although the Federal Reserve has stepped on the sidelines as far as interest-rate hikes are concerned in the short-term, the truth is that the Bank of Japan is light years away from raising interest rates. Most certainly, the Federal Reserve will raise those interest rates much quicker than the Japanese will do. That is one of the biggest drivers for the market than anything else, and you also have to keep in mind that the Bank of Japan may very well step back into the market and continue the quantitative easing that they have been doing for years in order to drive down the value of the Again. Ultimately, we think this pair goes higher so we look at pullbacks as potential buying opportunities, and of course an impulsive candle after the jobs number on Friday. 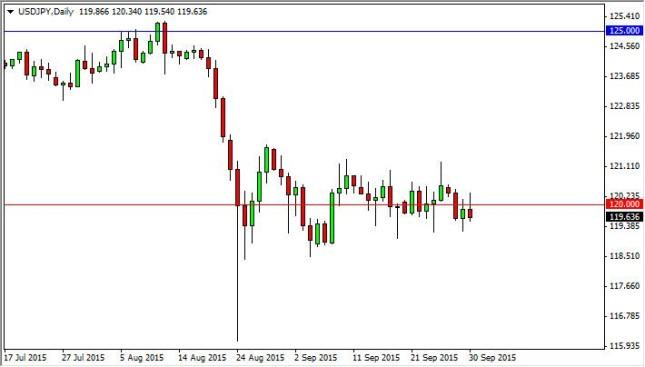