The USD/CAD pair attempted to rally during the session on Monday, as you can see the 1.02 level offered enough resistance to keep the market down. By the end of the session, we had formed a shooting star and this does fully agree with the thesis that we have been putting forward lately. We believe that this market will pull back to the 1.01 level, and it is there that we need to see support in order for the markets to continue higher. Otherwise, we think this market could start to drift a lot lower.

The oil markets are coming fairly close to significant resistance, so the idea that they will struggle at roughly the same time that this pair will find support lends a lot of credence to the old “Canada-oil correlation.” Looking at the timing between the USD/CAD pair, the Light Sweet Crude market, and the Brent market as being coincidental would be foolish. We believe that the stars are lining up correctly, and as a result we will be watching for some type of supportive candle.

It is because of the above theory that we are not interested in selling this market, even though we do have a continuation signal. We fully admit that if we were ultra-short-term traders, we would be more than interested in shorting, but the reality is that the market is set to really take off, as there are plenty of headwinds and potential headline risks out there to make people flocked to the US dollar again.

Also, it should be said that the Canadian economic numbers have been a little “squishy” lately, and as a result more and more people may be a bit nervous about handling of the economy. We will have to wait and see, but we believe that the 1.01 level should offer support, as it was significant resistance previously. It is not been tested, so this is a natural move at our opinion. On a supportive candle down there, we are not only wiling to buy this market, but we are willing to buy and hold for at least a couple of handles, perhaps more. 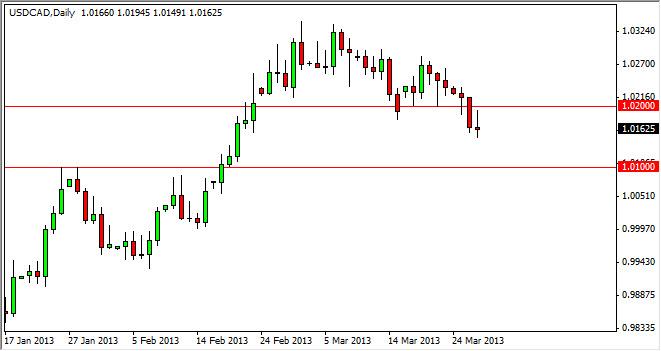