USDJPY broke above the top trend line of the price channel on the 4-hour chart, indicating that lengthier consolidation for the downtrend from 113.75 (Dec 12, 2017 low) is needed. Range trading between 105.54 and 107.90 would likely be seen over the next several days. However, as long as 107.90 resistance holds, the downtrend could be expected to resume, and another fall towards 103.00 is still possible after the consolidation. Only a breakout of 107.90 resistance could signal completion of the downtrend. 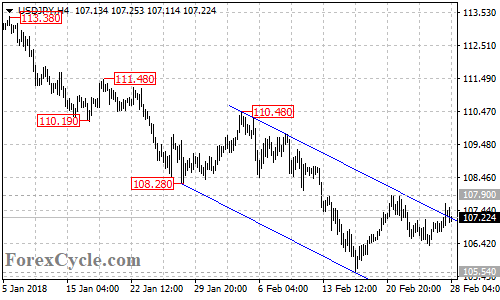