USDJPY failed in its attempt to breakout of 113.43 resistance and stays in a trading range between 111.47 and 113.43. Lengthier sideways movement would likely be seen in the coming days. As long as 111.47 key support holds, the sideways movement could be treated as consolidation of the uptrend from 107.31 and further rise towards 115.50 is possible after the consolidation. Near term resistance is at 113.43, a breakout of this level could signal resumption of the uptrend. On the downside, a breakdown below 111.47 level will indicate that the upside movement had completed at 113.43 already, then the following correction pullback could take price back into 109.50 zone. 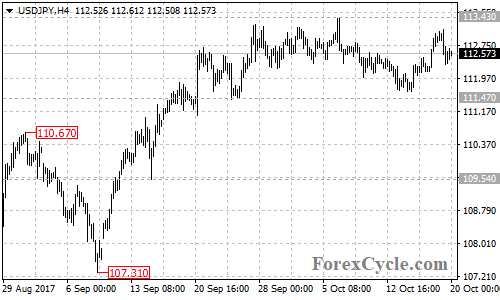