The USD/CAD pair rose slightly during the course of the session on Monday, as we continue to bounce off of the 1.30 level. On top of that, we have an uptrend line underneath that has of course been very diligent in keeping the long-term uptrend intact. Ultimately, oil will drive what happens in this pair, but I find it interesting that we have risen in the USD/CAD pair, while the WTI Crude Oil market actually rose as well. Typically, the 2 markets do not the verge much, as the Canadian dollar is so highly influenced by the value of petroleum.

While we have not only bounced off of a significant uptrend line, you have to keep in mind that there are a lot of things going on in the oil markets going forward. After all, there is talk of a production freeze which of course is a very positive sign for oil, but at the end of the day the market may be ahead of itself in bringing the value of oil higher. This is mainly because the countryside about doing a production freeze will have absolutely no influence over the United States and Canada, both of which are exporting massive amounts of crude oil at the moment.

Interesting enough for us is the fact that the WTI Crude Oil market is close to the $40 region, as we have just broken overhead. This is an area that US shale producers have suggested that they are willing to lock in prices somewhere in that general vicinity, you have to believe that there’s going to be quite a bit of bearish pressure on oil at this point in time, which in turn should send this market higher overall as the Canadian dollar will suffer. With this being the case, we fully anticipate that this market where the very least try to reach the 1.34 level over the next several sessions, but could very well break above the 1.35 level and much higher than that if we get enough momentum. At this point though, we would expect there would be volatility if nothing else. 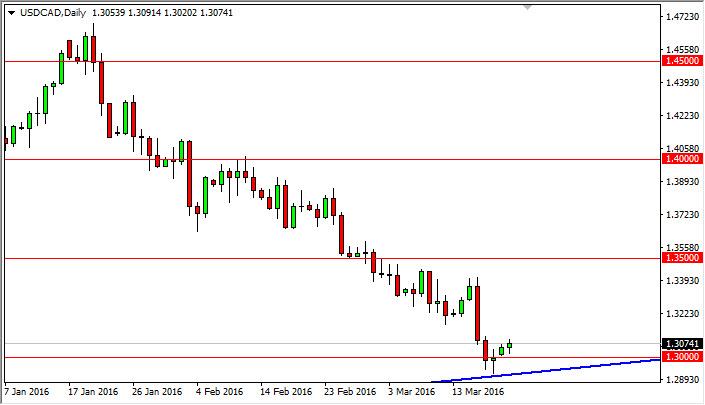