The USD/JPY pair initially fell significantly during the course of the session on Thursday, but as you can see bounced rather significantly off of the 118 handle. With that being the case, the market has formed a hammer and it now looks as if we can break above the top of that hammer, the market will then reach towards the 121 handle given enough time as we continue to consolidate in the same general vicinity that we have been consolidating in for several months. With that being the case, we think that there is a potential buying opportunity above the top of the range for the day, but you have to keep in mind that there will be a significant amount of volatility. After all, we have recently sold off in a market that has been rather steady. Because of this, there will be a lot of interest in a lot of noise, but ultimately we feel that the market will just simply continue the way it has for some time now.

With that being said though, if we break down below the bottom of the hammer for the session on Thursday that would be a very negative sign. If that happens, the market could very easily fall down to the 116 handle, which of course is where we bounced from significantly during the month of August. With that being the case, the market will more than likely remember this area and as a result I hate would anticipate a lot of buyers would get involved in this general vicinity.

That we broke above the top of the hammer, by the time we get to the 121 level a lot of things could change. If we can get above there though, things get very interesting as the market should then reach towards the 125 handle given enough time. Regardless what happens, you can count on quite a bit of choppiness, as is market is most certainly volatile and of course the Federal Reserve not necessarily being clear in its intentions will continue to make this a volatile pair. 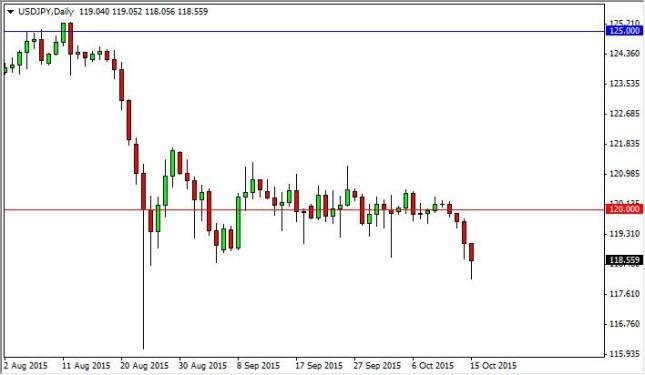