The USD/CAD pair initially tried to rally during the course of the session on Tuesday, but found the 1.31 level above to be resistive. We ended up turning back around to form a shooting star like candle, and that of course is a sign that the sellers are still very much in control. The 1.30 level below is massively supportive though, so having said that we are not willing to sell this market quite yet. That’s not to say that there isn’t going to be a trade, just that we are at very dangerous levels in both the USD/CAD pair, and the oil markets in general.

Remember that the Canadian dollar is highly influenced by the crude oil markets, and stay broke out during the session on Tuesday. The fact that the light sweet crude market broke out above the $48 level was of course a major move as it breaks out above the recent consolidation area in that market. In the Brent market was also very bullish as we broke well above the $50 handle, and now it looks set to test the $55 level given enough time. Both of these markets are very influential on the Canadian dollar, but not the only thing that moves that particular currency so don’t jump in out of the blue.

A supportive candle somewhere near the 1.30 level would of course be a nice buying opportunity. At that point in time, we would be very bullish as it is the level that forced the market lower several times during the financial crisis several years ago. With fact, it should be massively supportive now, so having said that, we would have to be very careful selling at this point in time. Nonetheless though, it is obvious that the market is trying to make some type of serious decision, so volatility could be fairly high. However, at this point in time we have to assume that the support holds. Is because of that that we are much more apt to buy this market on support then to try to preemptively sell it. 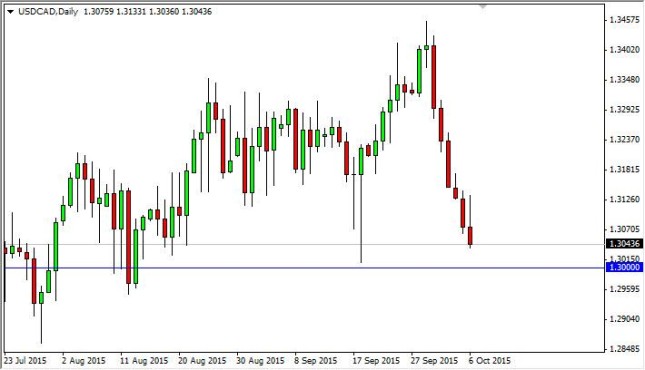