The AUD/USD pair initially tried to rally during the session on Friday, just as it did on Thursday. However, the market has struggled to keep gains recently in the Australian dollar, as the markets are focusing on the fact that the Federal Reserve mentioned that the global economy gives it pause as far as raising interest rates are concerned. We find this particularly interesting as the gold markets continue to rally, but the Australian dollar does not. That tells us that people are focusing on perhaps the Asian economies and the lack of strength that we are finding there instead of the interest-rate situation in the United States. Ultimately, the Australian dollar looks as if it is ready to continue the longer-term downtrend, mainly because of the shooting star that has formed for not only Friday, but Thursday as well. With that being the case, it’s very likely that we will head back to the 0.70 level.

The classic signal of course would be a break down below the bottom of the shooting star in order to start selling, and that’s exactly how we are going to approach this market. We have no interest in buying, because even if we break above the top of the shooting star, there is a large amount of noise just above and extending all the way to the 0.74 level. In fact, we believe that the 0.75 level is the top of that massive resistance, so having said that it’s not until we get well above the 0.75 level that we would even consider buying this pair. With that being the case, this is a “sell only” type situation and we believe that rallies will simply offer value in the US dollar going forward.

With all things being equal, we believe that the market will not only reach down towards the 0.70 level, but it will also continue to go even lower than that. The downtrend should continue, and we have no interest whatsoever in buying the commodity currencies such as the Australian dollar, as well as others. 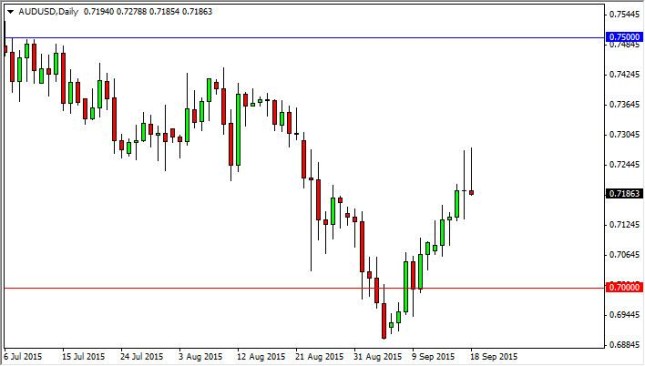