The EUR/USD pair tried to rally during the session on Monday, as the 1.37 level of course offered significant support yet again. However, you can see that a lot of selling pressure did in fact enter the marketplace, making the daily candle a shooting star. The shooting star signifies that the market is in fact still bearish, although we have a massive hammer from Thursday that we have to contend with that we are going to break down.

A break of the bottom of that hammer of course is very bearish, and at that point in time we would expect the market the head to the 1.35 handle which of course is the next major support level. Between here and there, we feel that the market would be fairly soft, meaning that it should sell off rather quickly. On the other hand, the move to the upside would be a bit difficult in our opinion as there is so much in the way of resistance and impulsive candle was over the last couple of weeks that have sold this market off quite drastically.

With that being the case, we feel that the absolute high watermark in this market right now is the 1.40 level. In fact, we believe that the European Central Bank will more than likely get involved as we get closer to the 1.40 level, as they are most certainly not happy with the increasing value of the Euro. On top of that, we have the Federal Reserve that is probably closer to tightening its monetary policy than just about any other central bank in the world, which of course should help increase the value the US dollar longer-term. Granted, the Euro tends to have “9 lives”, but at the end of the day we feel that rallies in the Euro will more than likely offer selling opportunities, especially on the shorter-term charts. On the other hand, if we break the top of the shooting star for the session on Monday, we think it is in the signal needed for a short-term trade to the upside. 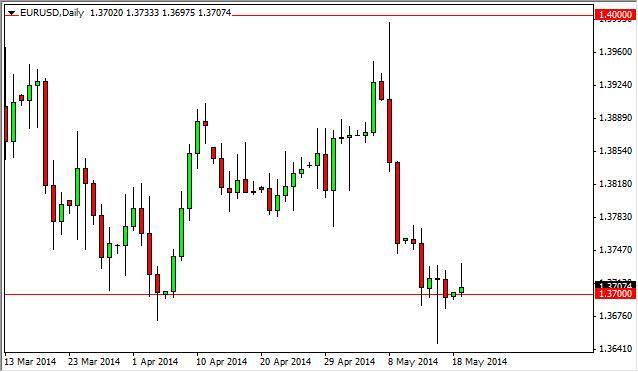