The USD/JPY pair fell during the course of the session on Wednesday, slamming into the trend line that has been supporting this market for some time. That being the case, it appears that the market will continue to go higher on a supportive candle, and that’s exactly what we are waiting on top of that, the 101.50 level is just below, and that of course has been very supportive. With that in mind, a supportive candle is more or less a nice buying opportunity, as the market should continue to go higher and with the longer-term uptrend.

The 103 level just above is very resistive in our opinion, and as a result we would expect that a move to that area should in fact bring out the sellers. We don’t necessarily think that the market is going to collapse from there, just rather that it is going to have some trouble, and we may have to pick up momentum a couple of different times in order to breakout to the upside. A move above the 103 level since the market heads to the 104 level, and then ultimately to the 105 level which is our longer-term target overall. With that, we still have an upward bias, and the fact that this trend line is holding certainly doesn’t hurt that assumption either.

If we break down below the 101 level, at that point time the markets would really fall apart. The 100 level would of course be targeted shortly after that, and then things get really ugly if we somehow break below that level. Keep in mind that the Bank of Japan is still looking to weaken the Yen anyway, so at the end of the day we feel that this market will ultimately go higher given enough time. Pullbacks are buying opportunities going forward as well, as we think this will be a longer-term grind higher rather than some type of significant move in a short amount of time. With that in mind, selling isn’t really a thought at this point, although we did obviously a very bearish day on Wednesday. 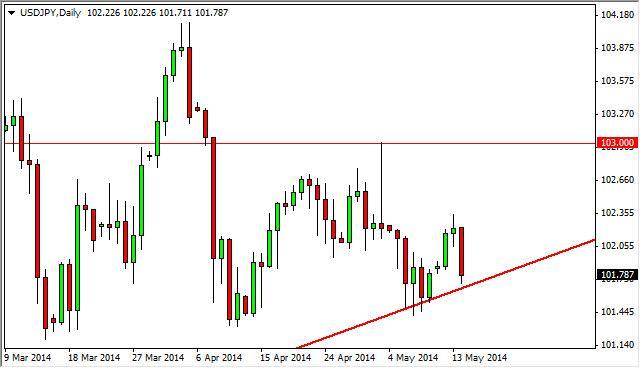