The USD/JPY pair initially fell during the session on Wednesday, but found support at the 101.50 level yet again. On top of that supportive area, we also had an uptrend line that was tested during the session, and as a result the buyer stepped in and push the market back up. At the end of the day, we had formed a hammer, and that hammer of course suggests that the buyers are going to continue stepping into the marketplace, and as a result we are more bullish than ever at this point in time.

We recognize that there is a lot of noise between here and the 103 level, as there is a shooting star from just a couple of sessions ago that we would have to deal with. However, ultimately we believe that this pair breaks above the 103 level, and then eventually test the 104 level, and then the 105 level. We also recognize that going to the 105 level would be very choppy as well, and as a result we feel that the market will continue to offer buying opportunities over and over again, mainly on the short-term charts.

Selling at this point in time is almost impossible, although we have to admit that a break below the hammer from the session on Wednesday would in fact be very negative for this pair. However, the fundamental simply do not line up with this pair going lower, at least at this point in time. We recognize that the interest rate differential between the two bond markets should continue to favor the US dollar, especially considering that the Federal Reserve has recently stated that they were yet again getting ready to taper off of quantitative easing. In other words, less stimulus in the marketplace and as a result this should bring out the interest rates in the United States slightly. Both of these currencies have very minuscule returns as far as interest rates are concerned, but quite frankly every little bit helps and we believe the money will continue to flow from Tokyo to Washington as long as these 2 central banks are on these paths that they have carved out. 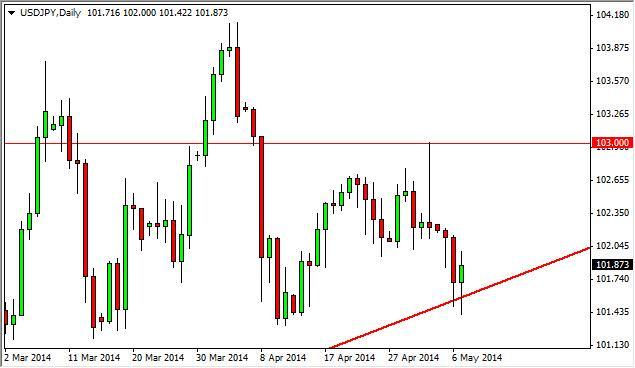