The USD/JPY pair rose during the session on Thursday, bouncing off of the 98 handle in order to shoot straight up in the air. This is a move that we have been waiting on, but now we are starting to plow into significant resistance. Because of this, we think that a pullback is probably coming, but a short-term one at best.

That short-term pullbacks should offer a buying opportunity going forward. Because of that, we feel that the market will eventually break the 100 handle, and head towards the 103 level. After that, we still think that this market has the 110 before it’s all said and done over the course of the next several months. This is going to be especially true if the Federal Reserve decides to taper off of quantitative easing in September or a bit over like has been suggested.

Remember, interest rate differential will drive this pair drastically, and the 10 year notes of the two countries should be followed. The more that the interest rate in the United States climbed against the Japanese interest rate, you can just about follow the correlation directly on this chart. Because of this, we feel that this market will eventually breakout to the upside in a strong manner, but do recognize the fact that the 100 level has been the site of a lot of noise.

There is a significant amount of noise at the 102 level as well, but we feel that is a minor at best. With that in mind, we are in a “buy only” mode for this pair yet again, as the Bank of Japan continues to work against the value of the Yen. Because of that, we have not sell this pair for ages, and have absolutely no scenario at this point in time that we can imagine doing so again. Pullback that shows support are buying opportunities, just as much as breakout to the upside are. We believe that this is the beginning of a long-term multi-year move higher, and as such treat it that way. 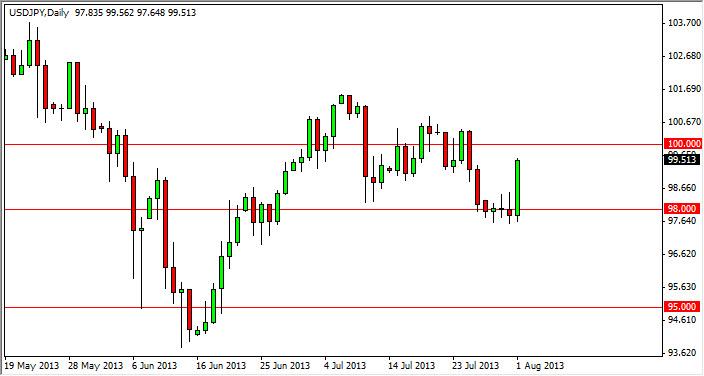