The EUR/USD pair shot straight up during the trading day on Friday as the US jobs number disappointed. This suggests to most traders that the Federal Reserve will have to implement further monetary easing in the near term. Because of this, traders will be attracted to the Euro for the interest rate differential.

Adding to this is the fact that the ECB now looks willing to buy bonds from countries that are struggling in the European Union. Because of this, it should provide a little bit of relief for the countries that are paying such high interest rates currently. With this in mind, it should provide a little bit of a cushion for the Euro against many of the other currencies. We are currently seen a large moves in favor of the Euro, which are probably short covering as well.

It should be noted that the end of the session close that the very highs of the day. This is almost always a sign that there will be more continuation, and that the buyers will continue to step into the market. Also of note for the close on Friday is the fact that we are currently at the 61.8 Fibonacci retracement level. This level was from the fall of the Euro back in late April, and under normal circumstances would be a place to watch out for. However, there is very little in the way of resistance all the way up to the 1.30 level.

Because of this, we think that as the Euro falls, traders will be well served to buy the dips. We think this is more or less a short-term positive tone, but think that the 1.30 level will be too much for the Euro to overcome. After all, even though there is talk of bond buying in Europe, we still don’t have all of the details. Nobody has the ability to disappoint the markets like the Europeans, and as such it wouldn’t be overly surprising to see them below it in a few days.

At 1.30, we are more than willing to start selling on signs of resistance. However, in the meantime we think that this market will reach that level and it should be bought by shorter-term traders. 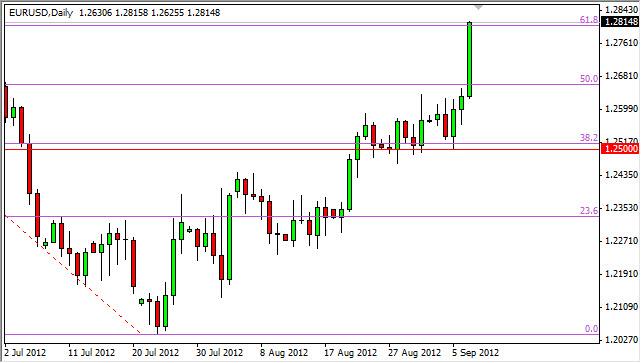