The USD/CAD pair fell hard during the Tuesday session as the risk on trade came back. Also, oil did give a slight bid for the session, and this helped the Canadian dollar as well. The fact that the candle for Monday was a massive shooting star probably didn’t hurt either truth be known.

The market is under enormous pressure, as the 200 day exponential moving average is just above the parity level, which of course is a massive psychological resistance level in and of it. The recent action has seen a methodical selling of this pair at the parity mark, and this looks as if there are more and more people adding to the short positions in the market. The buyers are holding up so far, but the 0.98 level looks as if it is the key for the bears. If this gives way, we could see much lower prices in this market.

Of course, there are also the oil markets in this equation. The fact is that the oil markets have been very choppy lately, and as a result there is a real struggle between bulls and bears in that market. As long as that is the case, there is a high probability of continued stagnation in this pair as well.

The Federal Reserve announcement in the US afternoon session today could provide some kind of direction in this pair, but only time will tell. It will more or less come down to the Fed’s economic outlook going forward as traders will try to gauge the demand for oil going forward. If it looks as if the economy in the US is going to improve, this pair should fall overall. Of course, we need the above mentioned 0.98 level to give way before we are ready to actually sell, but once it does we should see much lower prices.

We are waiting for the Fed announcement, and selling if there is a sustained move below the 0.98 level. (A 4 hour close below it.) If not, we are looking to buy once we clear the 1.01 level, but that is a fair stretch above at this point. 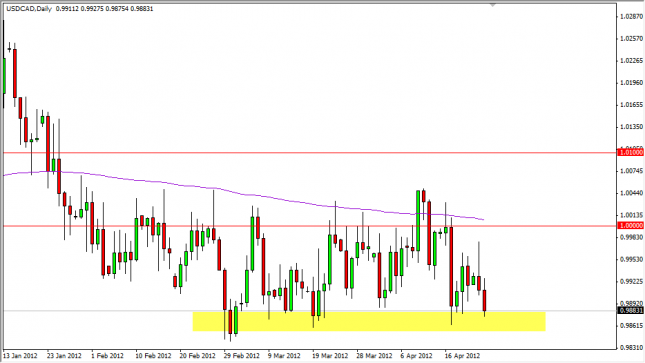