GBPJPY continues to trend higher but has bounced off the top of its long-term ascending channel visible on the 4-hour time frame. Price could be gearing up for a pullback to support at the 151.50 minor psychological mark.

Applying the Fibonacci retracement tool on the latest swing low and high shows that the 38.2% level is closest to the channel support and might be enough to keep losses in check. The 100 SMA is above the longer-term 200 SMA to confirm that the path of least resistance is to the upside or that the rally could still resume.

In addition, the 100 SMA coincides with the 50% Fibonacci retracement level, adding to its strength as a potential floor in the event of a larger dip. The gap between the moving averages is widening to reflect stronger bullish momentum. Stochastic is moving down but is nearing oversold conditions to show that sellers are feeling exhausted.

UK CPI came in weaker than expected as the headline figure fell from 2.7% to 2.5% instead of holding steady while the core figure dipped from 2.4% to 2.3%. Prior to this, the jobs report came in mostly stronger than expected but traders focused on the miss in the average earnings index, which would dampen inflationary pressures. 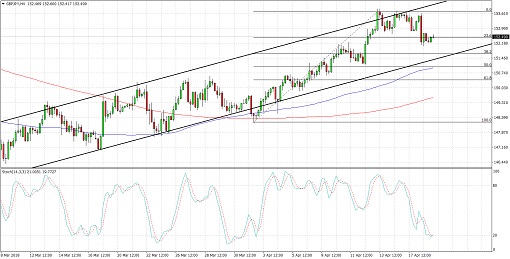 There have been no major reports out of Japan but the yen has been weakening on account of improving risk appetite and dollar strength. US bond yields have been on the rise, reviving the appeal of the US currency as a safe-haven. Japan’s national core CPI and tertiary activity index are due on Friday.