EURAUD recently broke below its head and shoulders neckline to confirm that a downtrend is underway. Price is pulling up to this broken resistance for a retest, and holding as resistance could send the pair down to fresh lows.

The 100 SMA is still above the longer-term 200 SMA, though, to indicate that the path of least resistance is to the upside. This suggests that the longer-term uptrend could still resume from here. Stochastic is nearing overbought levels, however, so sellers could return as price finds resistance at this 61.8% Fibonacci retracement level.

Economic data from China came in mostly in line with estimates, with only the industrial production report falling short. The figure slid from 7.2% to 6.0% versus the estimated dip to 6.4% to signal potentially weaker demand for raw material commodities from Australia.

Meanwhile, the quarterly GDP still reflected a 6.8% growth figure as expected. Fixed asset investment fell from 7.9% to 7.5% versus the 7.7% forecast while retail sales jumped from 9.7% to 10.1% instead of holding steady. 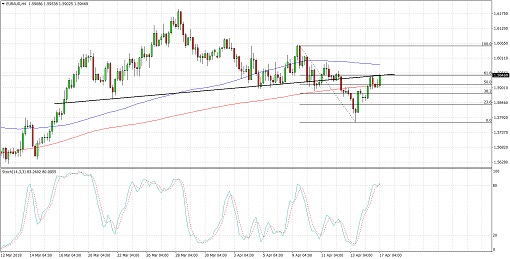 There are no major reports from the euro zone but commentary from ECB officials has mostly been hawkish, which could keep the shared currency supported. A return in risk-off flows stemming from geopolitical tensions could also be negative for the Aussie.